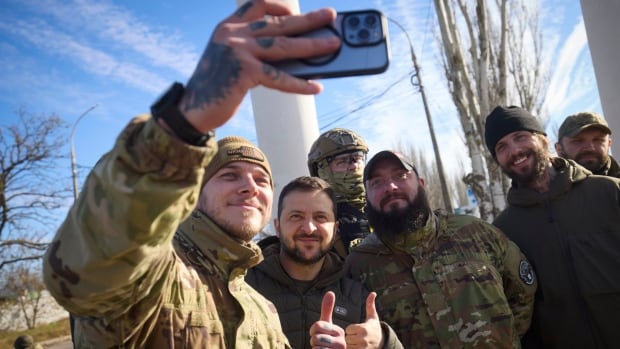 Ukrainian President Volodymyr Zelenskyy marched triumphantly through the streets of the newly liberated city of Kherson on Monday, hailing Russia’s withdrawal as the “beginning of the end of the war”, but also acknowledging the heavy toll Ukrainian troops are paying in their strenuous efforts to repel the invaders.

The liberation of Kherson was one of Ukraine’s greatest successes in the nearly nine-month war, dealing a blow to the Kremlin. This could serve as a springboard for further advances in occupied territory.

US President Joe Biden called it a “meaningful victory” for Ukraine.

“I mean, they’ve been really amazing. And I think it’s hard to say at this point exactly what that means. … But I’ve been very clear that we’re going to continue to deliver the capability to the Ukrainian people to defend themselves.”

Large parts of eastern and southern Ukraine are still under Russian control, and the city of Kherson itself remains within range of shells and missiles from Moscow. Heavy fighting continued elsewhere in the country.

In Kherson, Zelenskyy presented soldiers with medals and posed with them for selfies while adopting a defiant tone.

“This is the beginning of the end of the war,” he said. “We are arriving step by step in all the temporarily occupied territories.”

But he also noted with sadness that the fighting “took our country’s finest heroes”.

WATCH | Ukraine will prolong the fight against Russia this winter, according to an analyst:

Ukraine will continue its efforts against Russia throughout the winter, analyst says

Ukrainian troops look set to extend the fight with Russia in the south of the country into winter following Ukraine’s triumphant liberation of Kherson, said retired US General Philip Breedlove, former Supreme Allied Commander of NATO in Europe.

During a visit to The Hague on Monday, NATO Secretary General Jens Stoltenberg warned that “we must not make the mistake of underestimating Russia”.

“The Russian armed forces retain a significant capability as well as a large number of troops, and Russia has demonstrated its willingness to bear significant losses,” he said.

Kremlin spokesman Dmitry Peskov declined to comment on Zelensky’s visit to Kherson on Monday, saying only that “you know this is the territory of the Russian Federation.”

Torture and war crimes documented, according to Ukrainians

After the Russian retreat, Ukrainian authorities say they find evidence of torture and other atrocities.

In his nightly video address on Sunday, Zelenskyy said without details that “investigators have already documented more than 400 Russian war crimes, and the bodies of civilians and servicemen have been found.”

“In the Kherson region, the Russian army committed the same atrocities as in other regions of our country,” he said. “We will find and bring to justice every murderer. Without a doubt.”

The end of eight months of Russian occupation of the city of Kherson has sparked days of celebration, but also revealed a humanitarian emergency, with residents living without electricity and water and short of food and medicine. Russia still controls around 70% of the wider Kherson region.

The Institute for the Study of War said Ukraine had won “an important victory” in retaking the city and other areas west of the Dnipro River, but the Washington-based think tank noted that “it has in no way liberated the minimum territory essential for its future security and economic survival.

Ukrainian police have called on residents to help identify people who collaborated with Russian forces.

Zelenskyy has already appeared unexpectedly in other frontline areas at crucial times in the war, supporting troops and praising them for their battlefield exploits.

Video footage showed Zelenskyy waving to residents who waved at him from an apartment window and shouted “Glory to Ukraine!” The line “Glory to the heroes!” came back from Zelenskyy’s group, consisting of soldiers and others.

Zelenskyy urged residents of the liberated area to also be alert to traps, saying: “Please remember that the situation in the Kherson region is still very dangerous. First of all, there is “has mines. Unfortunately, one of our sappers was killed and four others injured while clearing mines.”

And he promised that essential services would be restored.

“We are doing everything to restore normal technical capacities for electricity and water supply as soon as possible,” he said. “We will bring back transport and post. Let’s bring back ambulances and normal medicines.”

Residents said departing Russian troops looted the town, taking the spoils when they withdrew last week. They also destroyed key infrastructure before retreating across the wide Dnipro River to its eastern bank.

A Ukrainian official called the situation in Kherson a “humanitarian catastrophe”.

The onset of winter makes the situation more difficult, with Stoltenberg saying that Russian President Vladimir Putin aims “to leave Ukraine cold and dark this winter”.

Biden said he expected things to slow down somewhat militarily “due to the winter months and the inability to get around the country as easily.”

The Russian withdrawal marked a triumphant step in Ukraine’s resistance to the invasion of Moscow nearly nine months ago. Over the past two months, the Ukrainian army claimed to have taken over dozens of towns and villages north of the city of Kherson.

The war continues as both sides report gains

But the bitter war continued – with bombardments, civilian casualties and gains on each side.

The Ukrainian army has now recovered three major areas of the country in its counter-offensives – the area north of Kyiv, the northeastern region of Kharkiv and now Kherson and many nearby settlements.

The liberation of Kherson came about six weeks after Putin annexed the Kherson region and three other provinces in southern and eastern Ukraine – in violation of international law – and declared them Russian territory.

The Russian Defense Ministry said its forces had completely captured the village of Pavlivka in the eastern Donetsk region. Several Ukrainian officials reported heavy fighting in the area in recent weeks, but did not confirm the loss of Pavlivka.