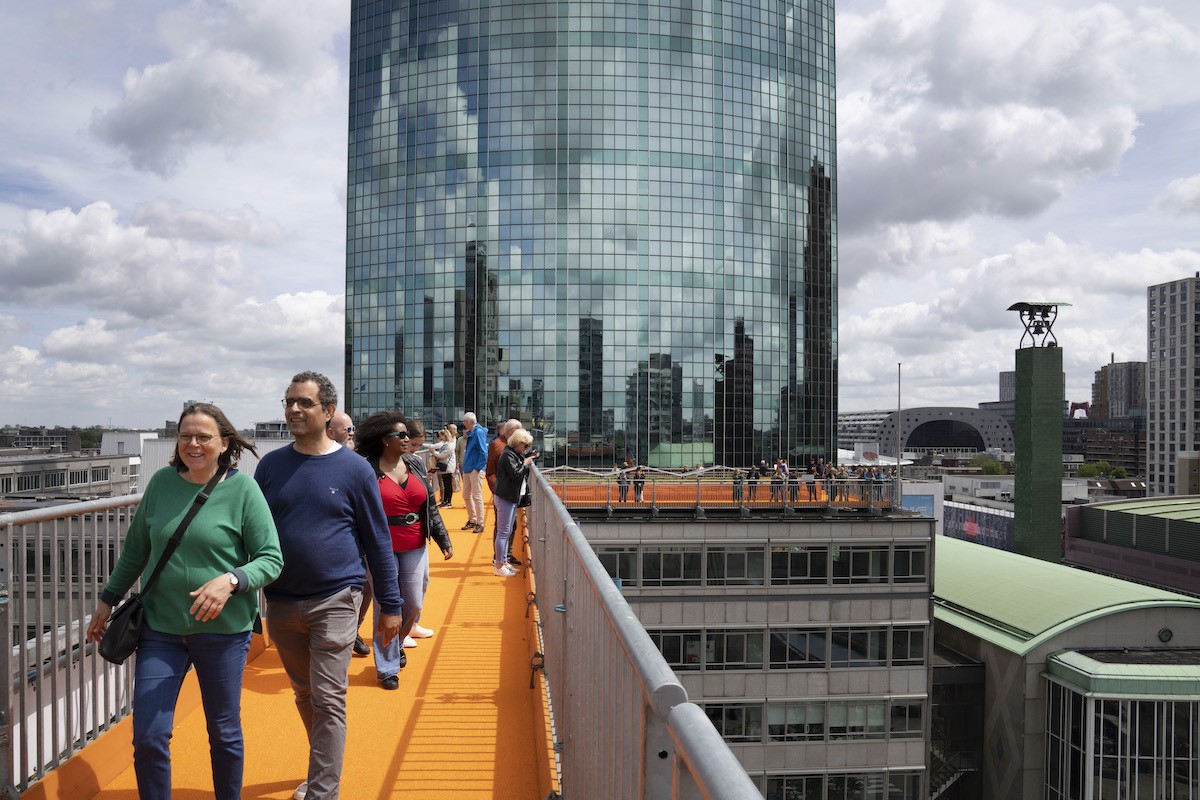 Green roofs are an underutilized tool to combat urban heat islands, but too often the low-income communities that could benefit the most are left behind. Here are lessons from a Dutch city on building rooftop spaces that benefit everyone.

From May 26 to June 24, the Dutch city of Rotterdam is showcasing the potential of rooftops. The Rotterdam Rooftop Walk connects the roofs by air bridges, offering a vision of the future of cities.

Green roofs can be an effective solution to urban heat islands, which are cities or specific neighborhoods within an urban area that have become significantly hotter than their surroundings due to the absorption and re-emission of heat from the Sun. Disadvantaged urban areas are particularly affected by the heat: A 2021 study in the journal Nature Communications found that heat exposure tends to be higher in lower-income neighborhoods, both in the United States and globally. Residents of these neighborhoods are also less likely to have air conditioning, or may not be able to afford it even if they do. This heat exposure exacerbates inequalities due to risks such as higher heat-related mortality, heat stroke, dehydration, loss of work productivity and reduced learning abilities, while increasing air conditioning costs.

Enter the green roofs. They can take many forms – lush gardens, potted plants, solar panels, urban farms, wildflower meadows and community spaces painted in light colors that absorb less sunlight – and can help combat heat islands. many ways. Plants and even trees on the roofs of buildings can significantly reduce the urban heat island effect by reducing temperatures. According to the EPA, ambient temperatures across the city can be lowered by 5°F with green roofs, reducing building energy consumption by up to 0.7% and thereby reducing energy demand. Green roofs can also retain water and thus prevent or reduce urban flooding. They filter greenhouse gas emissions and other air pollutants and attract more biodiversity.

Dr. Ashish Sharma, an atmospheric scientist and graduate professor at the University of Illinois at Urbana-Champaign, studies how low-income neighborhoods could benefit from more green roofs in Chicago. In a 2018 paper on the role of green roofs in reducing heat stress in vulnerable urban communities, Sharma writes that “Efforts to mitigate the impacts of heat, such as putting up green roofs, also offer solutions to social justice issues.” Sharma and his team identified several neighborhoods on Chicago’s South Side and West Side that are highly vulnerable to heat, have high electricity usage, and could also benefit from green roofs to reduce temperatures. But infrastructure is only one aspect of green roofs.

“You really have to invest in getting the community on board with green roofs,” says van Geest. Rotterdam’s experience has shown that maintenance is a key issue. To properly maintain these spaces, you have to be an owner. Often someone in the community takes the lead in managing a green roof, but in vulnerable communities many people have more pressing concerns than whether their roof is green. Community rooftop gardens and urban farms, such as in Singapore or Cairo, are a good solution: they offer all the benefits of green roofs while providing fruit and vegetables to the inhabitants of the buildings.

Another challenge for green roofs, especially in low-income neighborhoods with lower budgets, is funding. Sharma has an idea for that too.

“Big businesses, such as supermarkets, need to step up and install green roofs on their commercial properties in poor and vulnerable neighborhoods. By doing so, these residents and neighboring neighborhoods will be able to access the benefits of lower temperatures and address the issue of environmental justice,” said Sharma, adding that such public-private partnerships could be a smart and affordable approach to tackling climate change. environmental inequalities.

This is exactly what the Rotterdam Rooftop Walk wants to highlight: to create a public space, even on top of private buildings. The bright orange skybridges connecting the rooftops are accessible via stairs and elevators placed on the sides of the buildings, inviting everyone to enter. “If you don’t have to walk through a building to reach them, rooftops can be much more attractive,” van Geest says. Although you can see other rooftops from the rooftop walk, many rooftops provide secluded and safe space, making them a good retreat for more vulnerable groups like pregnant women and children.

Of course, not all flat roofs are good candidates for greening, and experts say you need to be strategic about where and how you build them. One reason is that the aggressive addition of green infrastructure can alter a city’s climate. In the case of Chicago, Sharma says a large percentage of green roofs will reduce air temperatures, but also likely reduce cool breezes coming from Lake Michigan and intensify air quality issues.

“With the number of green roofs we currently have, that’s not a problem; but we need to think about how to strategically place the green roofs to make the most of this heat mitigation strategy, while mixing the urban air in a way that there are no impacts negative effects on regional flows and air quality,” says Sharma.

And, while they can improve a street, green roofs cannot hide other infrastructure problems. “They are always a complement for the districts and the commercial areas of the city, explains van Geest. “If at ground level things are not right, fix the ground level first. Roofs are not a replacement or a reason to look away.

Rotterdam again provides great tips for cities on where to start with green roofs. Van Geest says the city is starting with temporary experiments to gain membership.

“We ask people to let us use their roof for a weekend or a week, and they’re open to that,” van Geest says. “That way you can lead by example and take the first step. Complete implementation of a green roof can take 5 to 10 years. If you want to set up a community rooftop garden, start by laying out some pillows or hosting a rooftop barbecue. If people like it, then it’s time to take the second step.

Sharma adds that collaboration between experts such as engineers, farmers, physicists, urban planners, local actors and residents is essential. “We need the voices of all stakeholders to be heard to make fair decisions,” he says.

Laura is an urban journalist specializing in sustainable and user-friendly solutions. She lives in London and reports from cities around the world.
Follow her on Instagram @parcitypatory.