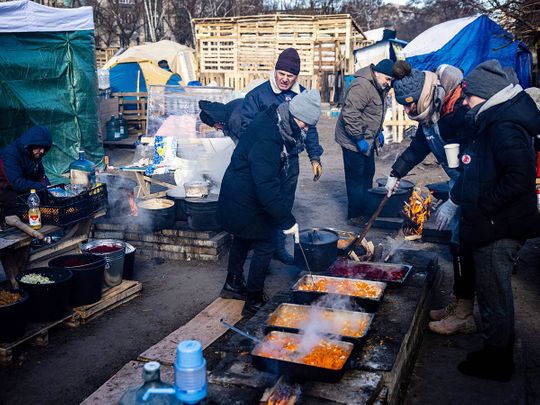 KYIV: Ukraine said on Saturday it had regained control of the Kyiv region as Russian troops withdrew from the capital and the city of Chernigiv.

AFP reporters saw at least 20 bodies in a single street in the town of Bucha near the capital, including one with his hands tied, and the body of a missing photographer was discovered in a nearby village.

“All these people were shot,” Bucha mayor Anatoly Fedoruk told AFP, adding that 280 other bodies were buried in mass graves in the city.

Meanwhile, in an attempt to increase economic pressure on Russia, the Baltic states of Latvia, Estonia and Lithuania announced on Saturday that they had stopped all imports of Russian natural gas.

As it pulls back from parts of the north, Russia appears to be concentrating on eastern and southern Ukraine, where it already holds large swaths of territory.

“What is the goal of the Russian forces? They want to take over both Donbass and southern Ukraine,” Zelensky said in a video address late Saturday. “What is our goal? To defend our freedom, our land and our people.”

But Ukrainian presidential adviser Mykhaylo Podolyak warned on social media that “without heavy weapons we will not be able to hunt (Russia)”.

Ukrainian authorities nevertheless offered citizens some good news on Saturday by claiming progress against the Russians more than five weeks after the invasion of Moscow sparked Europe’s worst conflict in decades.

Putin ordered tanks into Ukraine on February 24, and Ukraine estimates that 20,000 people have been killed in the war so far. More than 10 million people have had to flee their homes.

Ukrainian authorities said on Saturday that the body of a well-known photographer, Maks Levin, was found near a village in the Kyiv region that had been caught up in the fighting. Levin became the sixth journalist killed during the war, according to Reporters Without Borders.

Levin, a 40-year-old father of four, was reported missing on March 13; the body was found on April 1.

Russian efforts to consolidate its hold on the southern and eastern regions of Ukraine have been hampered by resistance from Mariupol despite devastating attacks that lasted for weeks.

At least 5,000 residents have been killed in the beleaguered southern port city, local officials say, while the estimated 160,000 who remain face shortages of food, water and electricity.

The International Committee of the Red Cross (ICRC) said its team left for Mariupol on Saturday to try again to carry out an evacuation, after being forced to return the day before.

A potential sign of progress, Ukrainian negotiator David Arakhamia told local TV stations that Russia had “verbally” accepted most of kyiv’s proposals in the peace talks – except on the issue of Crimea, which Moscow annexed in 2014.

Among the agreed points was that a referendum on Ukraine’s neutral status “will be the only way out of this situation”, Arakhamia said.