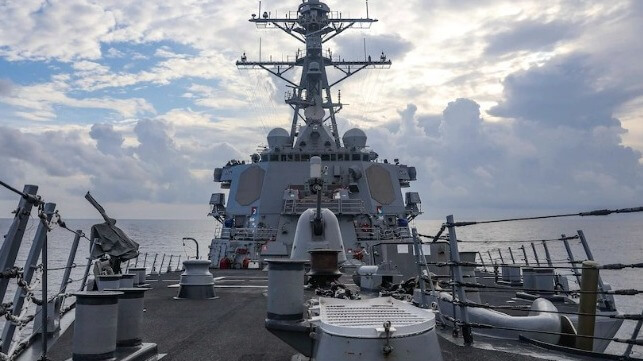 To support US interests, ratify UNCLOS and the Rotterdam Rules

From photos of anchored container ships waiting to unload in US ports highlighting supply chain crisis, to China’s maritime expansionism in the Pacific further threatening international trade and peace, current events point to two treaties international shipping laws that the Senate should now ratify: (1) the United Nations Convention on Contracts for the International Carriage of Goods Wholly or Partly by Sea, known as the “Rotterdam Rules” and (2) the Convention on United Nations Law of the Sea, better known as the “Convention on the Law of the Sea” or “UNCLOS.”

First, the very purpose of the Rotterdam Rules is to encourage global e-commerce to replace the slow paper transactions dating from the early days of shipping. Much of the global shipping industry is stuck in this archaic stamping, signing, shipping, re-stamping, re-signing, copying, transferring and delivering paper bills of lading and other shipping documents at every link of transport. This is due to outdated and sometimes conflicting maritime treaties. One, the Hague Rules, dates back to 1924, implemented in the United States by the Carriage of Goods by Sea Act of 1936. Much has changed since then with the multimodal transport of containers by ship, rail and truck.

Because shipping is so international, legal uniformity, trade predictability, and global harmonization with modern containerization and e-commerce are key to reducing cargo processing time and errors that lead to chain issues. supply.

The Rotterdam Rules provide the international legal regime necessary to support containerized e-commerce and the reductions in transport time resulting from more efficient movement of goods on its ocean route, as well as on its forward and onward land journeys in transactions of multinational transport.

Since the role of the United States as an importer and exporter of cargo occupies such an important segment of global maritime trade, the Rotterdam rules will have to be adopted by the United States before the rest of the world’s maritime countries do. sign – and they will. The United States must take the first step – and we should.

The Rotterdam Rules will not only speed things up; they are also good for the United States. Most Americans are unaware that there are almost no commercial ships operated internationally by American companies: nearly all of our inbound and outbound cargo is carried on foreign vessels. Because the Rotterdam Rules level the playing field in terms of liability for U.S. cargo interests vis-à-vis foreign vessels and encourage cargo security on board, ratification of the treaty will benefit producers, producers and manufacturers. American freight exporters as well as American importing consumers.

Much of the supply chain crisis has certainly been caused by pandemic online shopping from home, which may or may not ease in the future. And while there will continue to be supply chain challenges in overcoming a shortage of truck drivers, chassis and warehouse space at U.S. ports and in modernizing port infrastructure, accelerating millions and millions of routine freight transport journeys with e-commerce supported by uniform international standards. the law governing global transactions is a no-brainer.

Second, recent maritime power plays highlight the long-awaited need for the Senate to ratify UNCLOS – also without bickering. Because the United States favorably negotiated its provisions in the 1980s-1990s, UNCLOS enshrines freedom of navigation on the high seas and, if ratified by us, will advance our interests as a global maritime power. Top U.S. military leaders — not just the Navy and Coast Guard — have consistently supported ratification. UNCLOS also advances the interests of the United States as a coastal nation and our rights to natural resources in our 200-mile offshore Exclusive Economic Zone. In addition, UNCLOS promotes the environmental health of the world’s oceans.

Senate ratification of UNCLOS is now more urgent than ever so that the United States can legally challenge China’s ongoing maritime expansionism, including China’s militaristic annexation of the Spratly Islands in the Sea of Southern China and China’s aggressiveness toward Taiwan, the Philippines, Australia, and the Pacific trade routes used to transport American goods. China is also trying to restrict freedom of navigation and overflight on the high seas off its coast, unlike UNCLOS.

Since the United States is not a party to UNCLOS, we are handcuffed and hypocritical when we criticize China for its UNCLOS transgressions. Also troubling, unless we ratify UNCLOS, the United States will be left ashore when China strikes on the sly over the Authority’s planned 2023 deep-sea mining permit issuance. international seabed created by UNCLOS.

Even with America’s domestic political divisions, China’s militarism and seafaring maneuvers are something Republicans and Democrats should agree to limit by bilaterally mustering the two-thirds vote of the Senate needed under the US Constitution to ratify this. treaty.

China must also be watched closely in the Arctic – another region where the United States is crippled without the force of UNCLOS behind us. China claims to be a “near-Arctic state” and conducts “scientific research” in the Arctic. To maintain its ‘Polar Silk Road’, China is building its third Arctic icebreaker – unlike the United States which now has just one old heavy icebreaker which splits its time between the Arctic and the Pacific. ‘Antarctic.

Russia, of course, is also a concern. Its aggressive claims in the Black Sea and on the Arctic continental shelf and international straits are contrary to UNCLOS, but again our protests are futile since the United States is not a party to the treaty. As we all know, Arctic sea ice is rapidly melting and just as rapidly opening up the Arctic to commercial shipping. Faster than using the Suez Canal, it is now viable in summer to sail from the Pacific through the Bering Strait west to Alaska and along the Northern Sea Route over Russia towards Europe.

Additionally, cruise ships, commercial fishing, energy development and mineral exploration are new and growing Arctic industries. These pose environmental risks, including devastating cold-water oil spills and other maritime accidents far, far, far away from the Coast Guard and first responders of any country. Circumpolar Inuit and others are facing upheaval.

But without ratifying UNCLOS, the United States has limited control over Arctic developments. Importantly, unless we ratify UNCLOS, a US representative cannot sit on the Commission on the Limits of the Continental Shelf to best protect the contours of our claim to a US exclusive economic zone north of Alaska.

The resources of the Arctic Ocean are opening up, for better or worse, as are the geopolitical claims on them, but the United States is losing both.

With 161 other countries plus the European Union having already adopted UNCLOS, our failure to ratify the treaty lends credence to global skepticism of American leadership and declining respect for the United States in promoting peace. international rule of law. UNCLOS is recognized by the rest of the world as the international law of the sea – and even the United States recognizes it. International tribunals have rendered dozens of legal decisions on the law of the sea. But because we are not a UNCLOS actor, we have no influence on this emerging international jurisprudence and all that the States United argue on the world stage regarding maritime issues is taken with a grain of sea salt.

The United States should ratify UNCLOS now to reap our negotiated benefits.

There are no downsides and only upsides for the United States. In practice, we already adhere closely to UNCLOS standards, so the United States can ratify without any disruption to our military or commercial operations. By gaining seats at various UNCLOS tables, we will be able to influence the evolution of maritime developments and laws. And with our expanded ocean access, America’s maritime industries and workers will have more work.

It should also be recognized that any anti-UN sentiment opposed to UNCLOS not only lacks foundation, but would also miss the opportunity for the United States to best advance our maritime interests and sovereignty – including the assertion of American rights in the Arctic and elsewhere.

The United States Maritime Law Association, fully joined by the American Bar Association, urges the Biden administration and the Senate to take immediate action to ratify these two international maritime treaties which should enjoy bipartisan support. They will enable the United States to better respond to current and future global maritime issues.

In summary, the United States, as a maritime power, should endorse the universally accepted international law of the sea by ratifying UNCLOS so that we can reap the benefits, and should also lead the world in adopting the Rotterdam Rules for facilitate electronic, interconnected and global ocean commerce.

David J. Farrell, Jr. is president of the United States Maritime Law Association, founded in 1899. Its membership consists of 2,200 maritime lawyers and industry leaders. The association does not lobby because its members professionally represent a wide variety of often conflicting interests. But on particularly valid public policies that would benefit from a legal solution without inconvenience, he adopts consensus resolutions, as he did to encourage the United States to ratify UNCLOS and the Rotterdam Rules.

The opinions expressed here are those of the author and not necessarily those of The Maritime Executive.