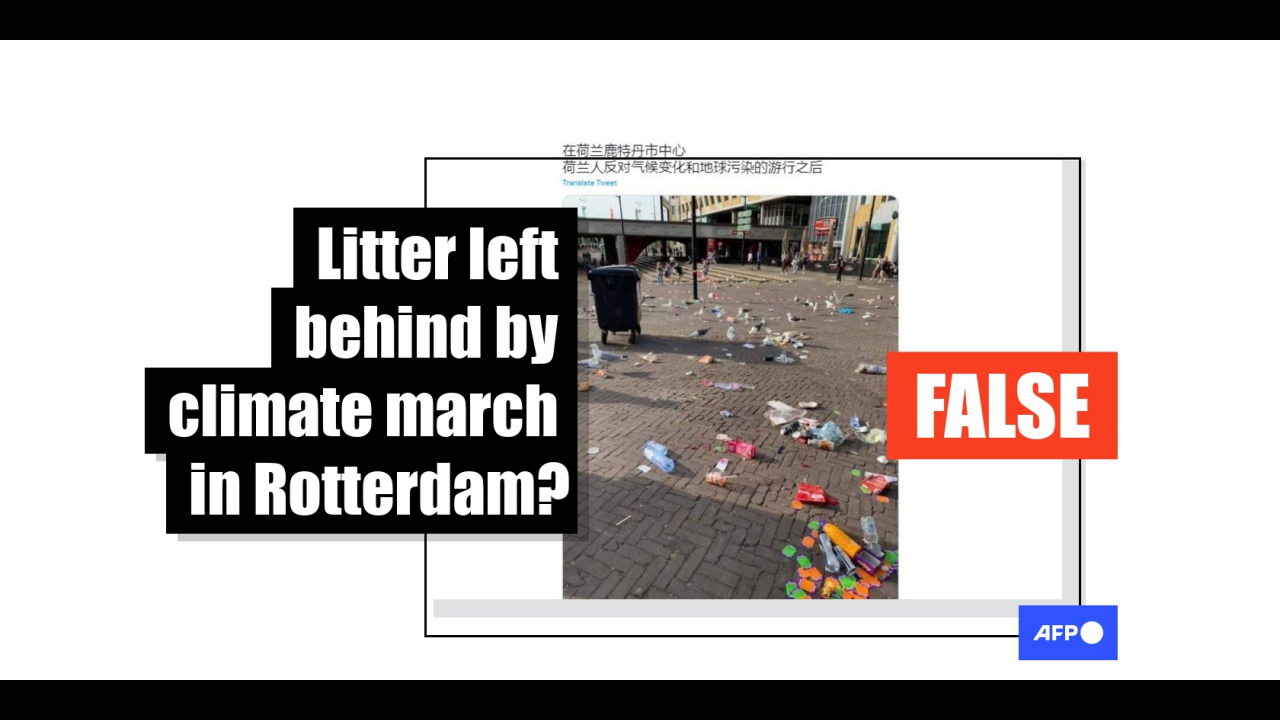 This photo was taken near a concert hall in Amsterdam, not after a climate march in Rotterdam

A photo of a trash-strewn street has been shared hundreds of times across several Dutch and Chinese social media posts that claim it shows the aftermath of a climate march in Rotterdam, the Netherlands, on June 19, 2022. However, the claim is false. The photo was taken in Amsterdam outside the Johan Cruyff Arenabefore a performance by American singer Billie Eilish on June 18 at the adjacent Ziggo Dome.

“After the Dutch march against climate change and pollution in the center of Rotterdam, the Netherlands,” reads the simplified Chinese caption of the photo, shared here on Twitter on June 21.

The picture, which appears to show discarded cans, bottles and plastic bagshas been shared over 160 times.

It circulated after thousands of people attended a large climate march in Rotterdam, which was covered by local media herehere and here.

The march, organized by the Dutch Climate Coalition, took place on June 19 between 1 p.m. and 5 p.m.

The photo was shared with a similar claim in Chinese on Twitter and Weibo as well as in Dutch on Facebook.

However, the claim is false: the photo was taken in another city in the Netherlands in a context unrelated to the climate march.

Garbage outside the stadium in Amsterdam

A reverse image search on Google led to similar photos on Twitter here and here, which were posted on June 18, a day before the climate march.

AFP contacted a Twitter user who posted a photo showing litter similar to that seen in the misleading posts.

Below is a screenshot comparing the photo used in the misleading post (left) and the photo posted to Twitter on June 18 (right), with the corresponding trash circled by AFP:

Internet user @RensKatyCatP told AFP that the photo was taken in Amsterdam on June 18 before a concert by American singer Billie Eilish.

They also sent AFP a screenshot of the photo’s metadata, which verified the date and time it was taken:

Eilish performed at the Ziggo Dome, which is next to the Johan Cruyff Arena, on June 18.

According to the venue’s website, she was scheduled to perform at 9:15 p.m., about two hours after the photo showing the littered street was posted on Twitter.

Details of the photo shared in misleading social media posts also match features around the Johan Cruyff Arena that are visible in Google Street View.

Below is a screenshot comparison of matching features highlighted by AFP, including road signs (yellow), steps (red) and a restaurant sign (blue).

AFP has previously denied claims that photos of litter are being used to discredit climate activists, including here in Canada and here in Australia.

Bram Karst, spokesperson for the Rotterdam Climate March, denied the photo shared online showed the aftermath of the protest.

“It was not the case at all. These people are there to support the climate, and if something falls by accident, like a protest sign, then it is cleaned up properly,” Karst told AFP on 21st of June.

Karst also tweeted this photo on June 20 with a caption that it shows cleaners at the end of the march on June 19.