It is a growing criminal case.

The increase in the volume of cocaine shipped from Latin America to the Netherlands, via the port of Rotterdam, has also increased the number of young people employed by criminal organizations to collect drugs hidden in cargo.

The BBC has seen the dangerous work of the so-called “cocaine collectors”, who serve as a link to drug supply chains in Europe.

The monitor shows a dozen dark figures running with military precision towards a freight container in the port of Rotterdam.

The shipment of Colombian tropical fruits may have already been unloaded, but this 12-meter-long metal crate among thousands of identical containers still contains merchandise: 80 kilos of cocaine hidden in a refrigerator, with a market value of ‘approximately 4 million euros (4.52 million US dollars).

The collectors’ mission is to remove the drug from the container and keep it away from the docks. Then it will be sent to European capitals like Amsterdam, Berlin or London.

“The port is a gold mine,” said a hooded man interviewed by journalist Danny Ghosen on Dutch channel VPRO.

“I can make a lot of money near my home … and there is always work to be done.”

He is one of the young people employed by powerful criminal gangs.

“Every mission is different,” he says. “A boss tells you ‘you will gain so much to distribute’; others say ‘you will keep some of the drugs and sell them yourself’ ”.

“We discovered them about two years ago,” says Andre Kramer, owner of a logistics company in the port.

“There was one or maybe two and you saw them a few times a year. But over the past six months, the groups have grown. There are 10 or 12 people and they act 3 or 4 times a week ”.

The increase in traffic makes the collectors’ methods more sophisticated.

Sometimes they don’t take the cocaine out of the port, but transfer it to another container designated by the gangs with the help of someone from inside.. The goods will then leave the port area in a truck. At other times, gangs wait inside the port for drug shipments.

“We recently found three hotel containers,” Kramer explains. “Collectors can spend days there. They eat, drink and relieve themselves inside. We found mattresses, empty water bottles and food containers. 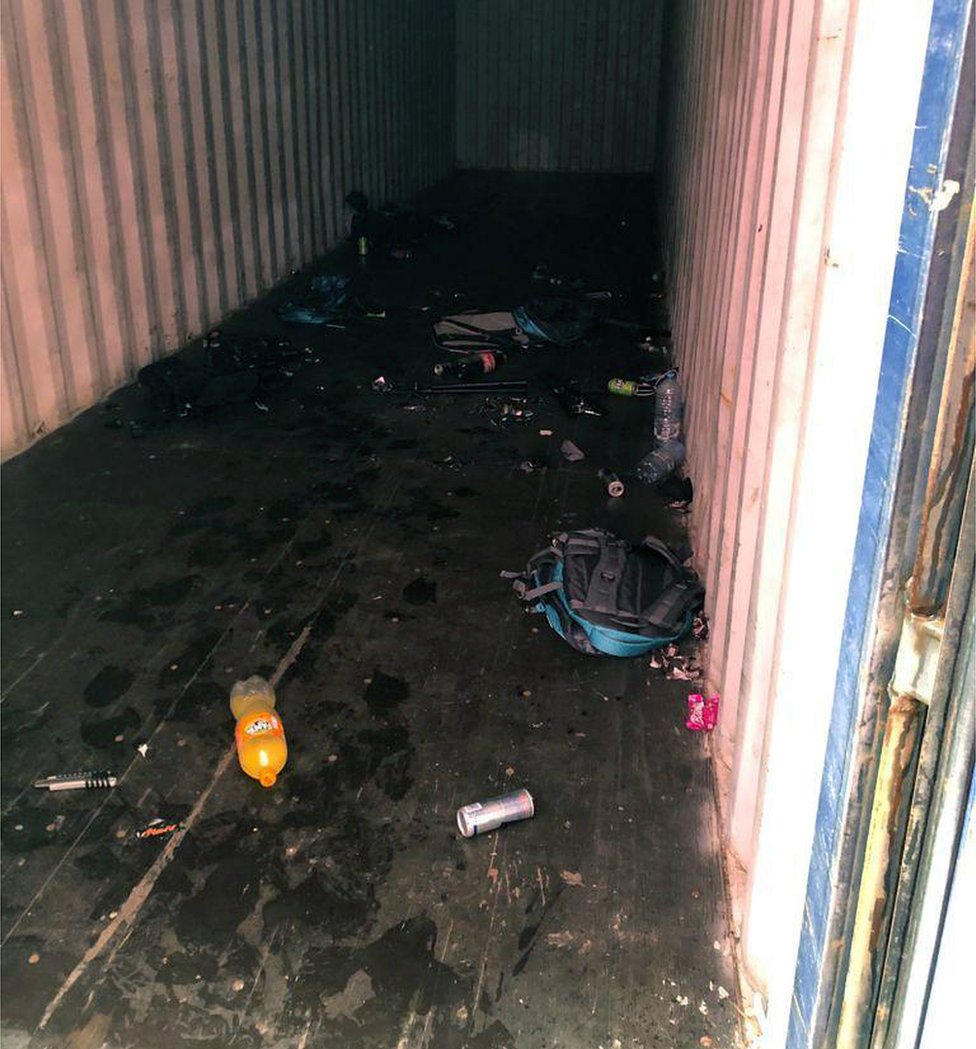 BBC Remnants of the presence of drug collectors.

But hiding in a container while waiting for the path to clear can be extremely dangerous.

In early September, nine young people were trapped after the door of the container they were hiding in got stuck, partly filled with logs.

“If you lock yourself up with objects like wood or fruit, which consume oxygen, there will be less air for the people inside”, explains Jan Janse, chief of police of the port of Rotterdam. .

Although the bands generally make sure that the containers can be opened from the inside, this time something went wrong and the collectors were trapped.

In the midst of the panic, collectors called 112 for help.

“We had this information that nine people were going to die in a container, but in a terminal with 100,000 containers, and the collectors themselves did not know exactly where they were,” says Janse.

“We had to search all the facilities, with helicopters, lots of police, customs, firefighters and ambulances. They were lucky that we found them in time ”.

It took 4 hours to find them. Some of the men had to be hospitalized for breathing difficulties. For security reasons, Janse, who has been the port’s police chief for seven years, prefers not to reveal how they found the collectors.

“Let us leave it to ourselves to do smart things,” he said.

Business on the rise 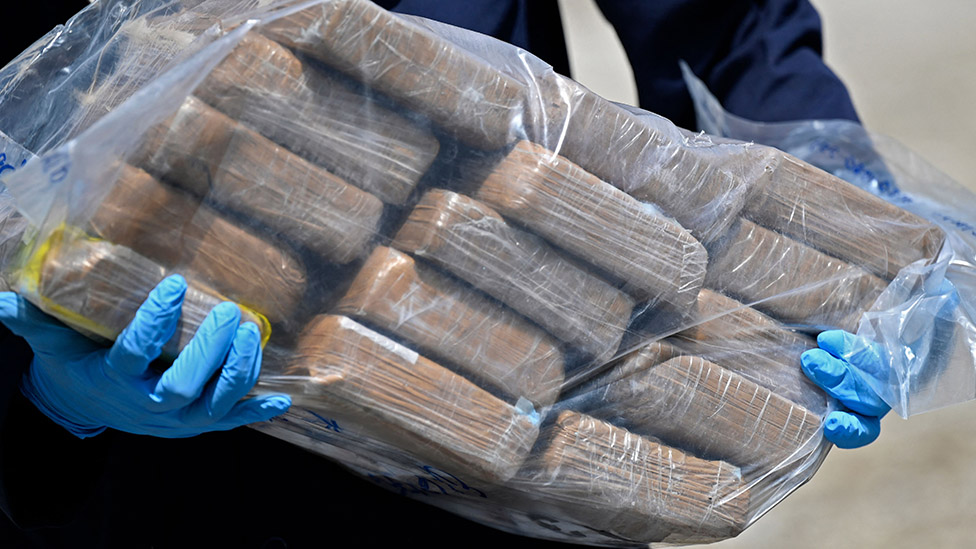 . The amount of drugs intercepted continues to increase.

“We estimate that this year there will be 60,000,” predicts Janse. “Every year, we break the record. I am not proud. It’s good that we are apprehending cocaine, but a huge amount is coming. “

And what is discovered in the port is only a small part of this illicit traffic.

In September, 110 gatherers were captured in the port area in just one week. But unless they are caught in the act, the only risk for them is a fine of less than 100 euros ($ 113). Some carry cash to pay instantly in case they get caught.

“We say that we go for a walk, that we are fascinated by the competitors”, admits the young man who lives off the unloading of the drug which arrives. 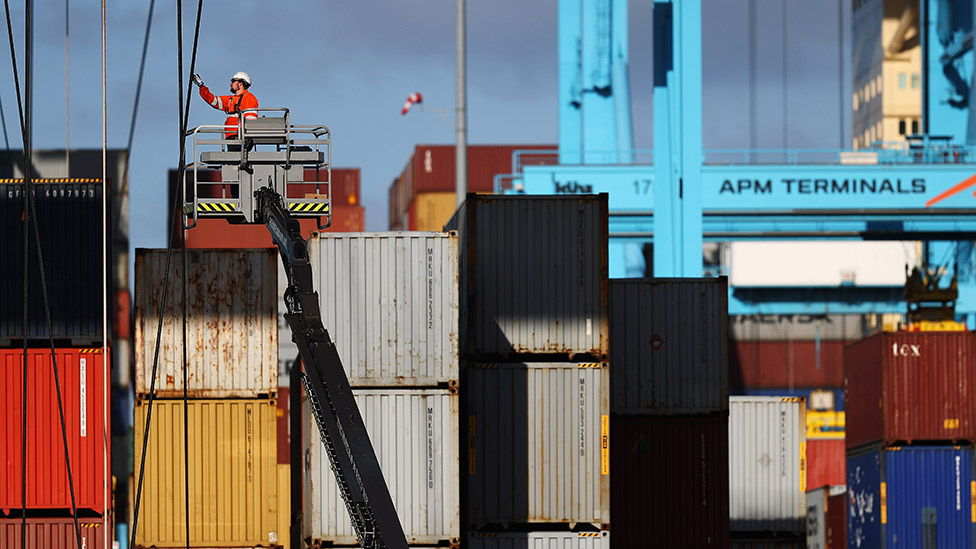 42 kilometers long, Rotterdam is the largest seaport in Europe. Over 23,000 freight containers are handled there every day.

There is something essential to the cocaine collectors and drug traffickers who arrive here: corruption.

“If you come here tomorrow, I guarantee you can get one of the security passes.” Just tell a worker that you will pay him 500 euros (US $ 565) if he lends him his, ”explains the drug collector.

“It’s hard to do our job without someone inside, like a customs officer. He can remove from the list a container that needed to be inspected. “

With those who refuse to cooperate, collectors use intimidation.

“When a customs officer says no, you are threatening your children. Then he said yes very quickly, ”says the young hooded man.

Kramer assures that its employees are under pressure because they are in the crosshairs of those who work for organized crime.

“There are people who have been approached in their homes telling them to put containers in a specific location, like next to a fence,” he says. “And I had people arrested. They don’t want to work here anymore; they are afraid “.

“Much of the crime in the city is linked to the drug problem on the docks,” he says. “We have a shootout almost every day. Violence is increasing ”.

And the bloody repercussions of the cocaine trade across the country are also on the rise, including the daylight murder in Amsterdam of Peter R de Vries, the most famous Dutch investigative journalist.

“The mafias are very well organized. They have their CEO, their human resources, their staff and their recruiters, ”explains Nadia Barquioua, founder of JOZ, a youth support organization.

JOZ works on the south shore of Rotterdam, one of the poorest urban areas in the country and is home to many drug collectors. More than a quarter of its population is under 23 and more than half is of immigrant origin.

In the 1960s and 1970s, migrants settled there attracted by employment opportunities at the port. But when industrial activity shifted west and work here ended, those who could afford it left, leaving a neighborhood in which many households are now low-income.

JOZ targets schools, clubs and community centers in an effort to get young people out of crime.

“We have to teach them that earning money in a normal way is much safer and that they have opportunities in the city,” explains Barquioua.

“It is easier to raise happy children than it is to raise up broken men.”

And in the port of Rotterdam there are more and more drug collectors.

“We have 14 and 15 year olds doing this work and it’s worrying,” says Hillenaar. “They are getting younger and younger. “ 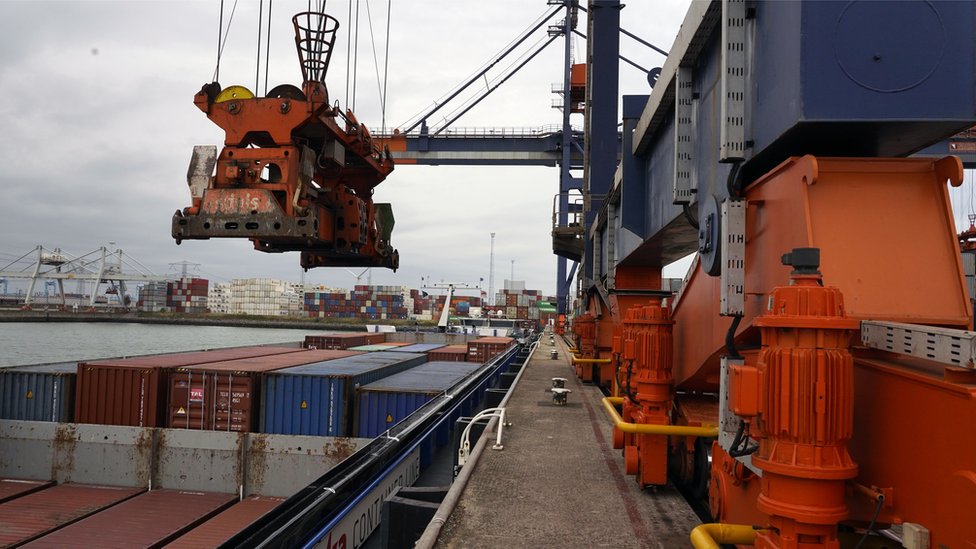 Now that Christmas is approaching and the city is talking about a “White Christmas,” not precisely because of the snow, Hillenaar has a message for cocaine users.

“Every day, 40,000 lines of cocaine are snorted in the city. Every line you sniff has a story of extortion, violence and death behind it ”.

The prosecutor is convinced that a legal change planned for 2022 will have a chilling effect on collectors.

It waives fines and imposes a prison sentence of up to one year on any unauthorized person in the port area. But, given the large amounts of money that can be earned as a collector, not everyone is convinced that it will work.

“Honestly, I don’t think the arrival of drugs in the port of Rotterdam is going to stop,” says Kramer. 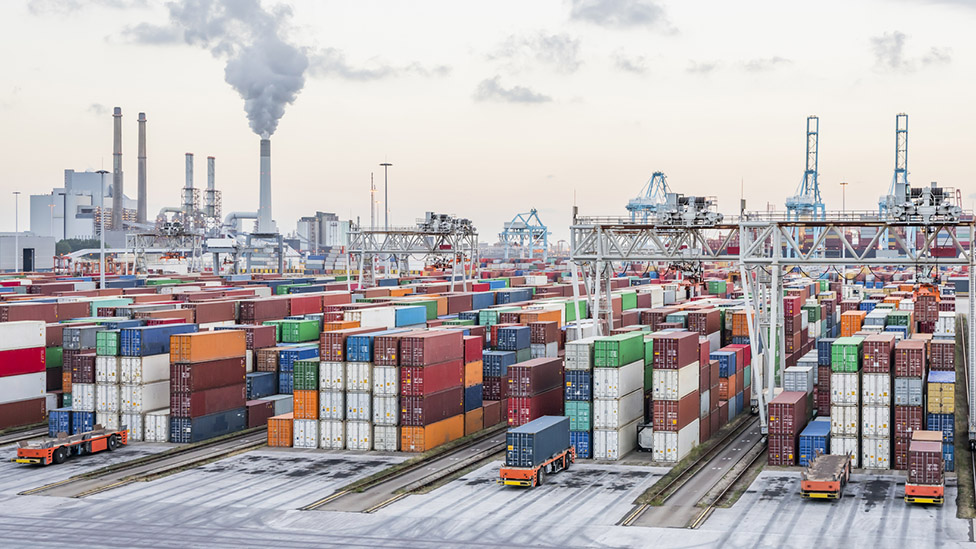 . The port of Rotterdam is the largest in Europe.

It is also concerned that increasing sentences and threats of prison terms could lead to an increase in violence.

“Today, the pickers are quietly retiring. But it’s gonna be tough when they use knives, guns, or whatever to escape. We don’t want that kind of Wild West in our terminal. ”

For some young people, the risk of ending up in jail can make them think twice before donning dark garbage clothes and sneaking into container yards. But given how much is being offered, others won’t be so easily discouraged. They know they are an essential link in the chain of drug trafficking to Europe. And this business has no signs of selling anytime soon.

Remember that you may receive notifications from BBC News Mundo. Download the latest version of our app and activate it so you don’t miss our best content.