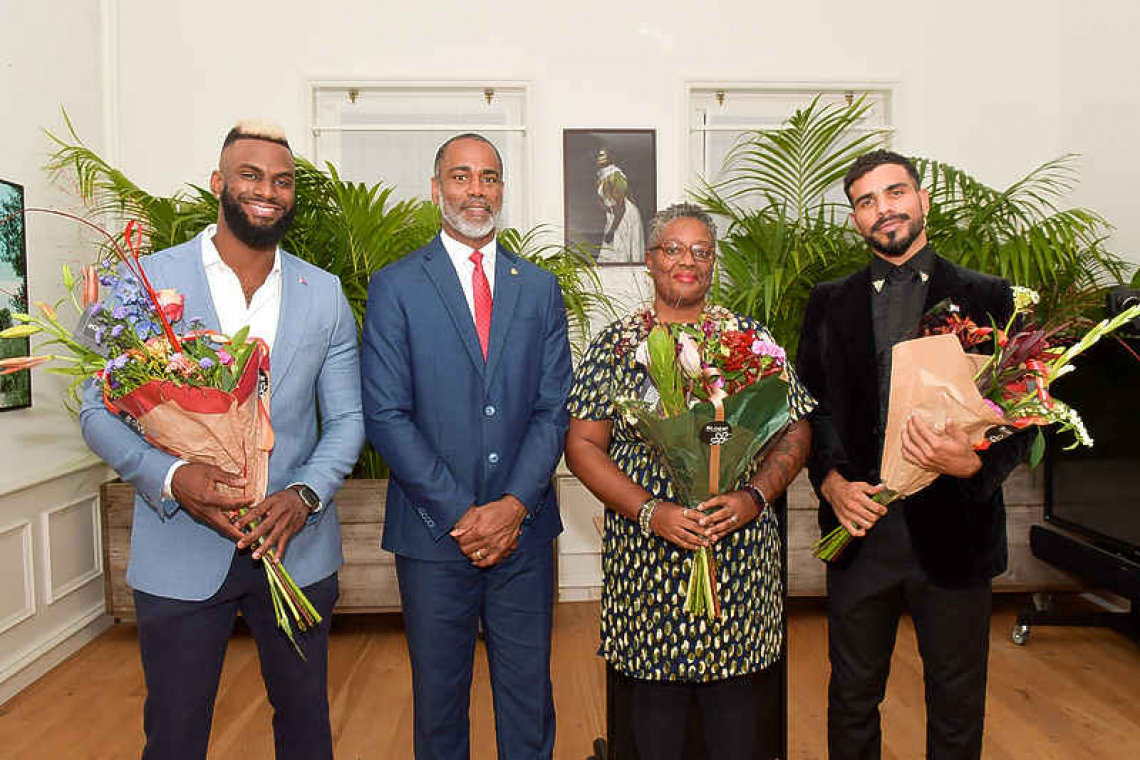 PHILIPSBURG – Four Saint-Martinois were recognized for their exceptional contributions during a ceremony organized by the cabinet of Minister Plenipotentiary René Violenus in commemoration of Saint-Martin, celebrated on November 11.

Denzel Richardson and Dudley Leonora were honored for their contributions to the field of sport; Lysanne Charles for her research contributions and Lisandro Suriel for digital arts and photography. Suriel’s work was showcased at the event and the pieces on display were said to have been a clear representation of the ancestors in their natural state and grace.

Violenus said the four people who have been recognized exemplify the true spirit of Saint Martin and make their mark in their areas of expertise. “For this we are more than grateful and proud,” he said during a speech at the event.

The ceremony was one of two activities coordinated by Violenus’s cabinet to commemorate St. Martin’s Day.

The ceremony in which the four were honored took place at an evening reception centered on this year’s St. Martin’s Day theme “Triumph, Even in the Face of Adversity”.

The representative of the French Embassy, ​​Colonel Christian Bachmann, spoke of the relations between Saint-Martin and Saint-Martin over the decades and the common society in difficult times during his congratulatory remarks.

The Director General of the Ministry of Kingdom Affairs, Henk Brons, spoke about the relationship with Saint Martin in the Kingdom. He expressed the hope that this relationship, even at times strained, would turn into a stronger bond for the good of both countries and their people.

In her speech, Violenus said the theme was a reminder that, now more than ever, the challenges and setbacks that Saint Martin as a small island has overcome, especially in the recent past.

“It is also important for us to recognize that this resilience is a model in line with Caribbean traditions even before European contact,” he said.

“… Thanks to our encounters and our experiences with adversity, mainly hurricanes, droughts and floods, we, the inhabitants of Saint-Martin, have always found the strength to rise up. Our resilience has been tested time and time again by natural disasters, economic hardships, personal setbacks and many other forms of hardship. Every setback has tested our resolve, but today we are still triumphant in the face of calamity. It’s part of our DNA, an essential part of who we are.

He continued, “As a people we have learned to work in an interdependent way to contract / process whatever comes our way and not be defeated. We rest on the shoulders of our ancestors, whose heritage instilled in us a mentality to go forward and never give up in defeat.

As the country grapples with the impacts of the global COVID-19 pandemic, difficult choices have had to be made to ensure the survival of the country and its people. “We have again had to use the knowledge we have accumulated over the centuries to overcome trials and move forward. Adversity is always knocking on our door, but we stay positive and find ways to cope, ”Violenus said.