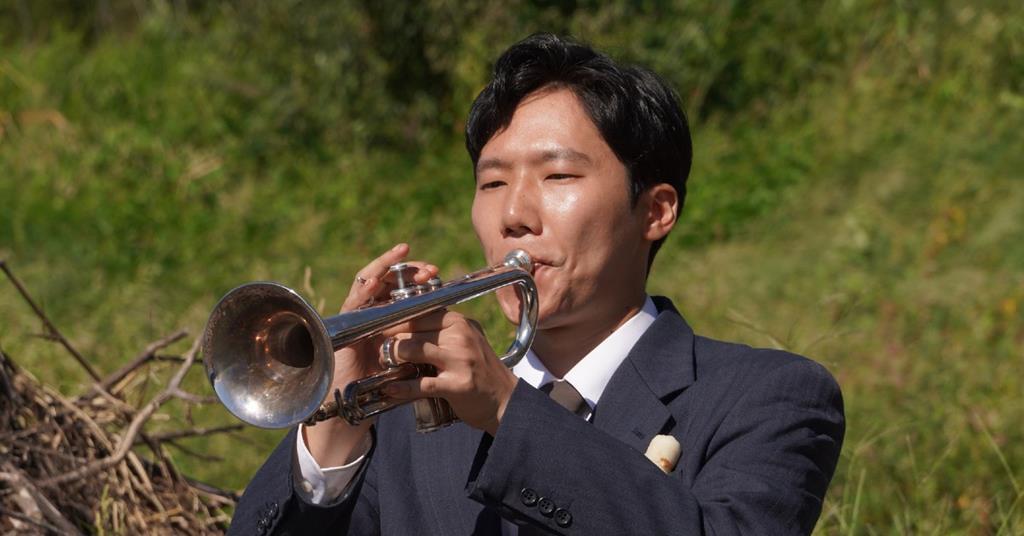 The singing harmony of a waltz by Johann Strauss provides a gentle counterpoint to the bitter dissonance of the conflict in The Blue Danube. Ikeda Akira’s absurd, anti-war satire follows a familiar path, but the dry, tongue-in-cheek humor and metronomic precision of the execution yield modest moments of hilarity and poignantness. The dismal air and the heavy reliance on repetition always combine to make the film a sort of acquired taste.

Ikeda seems to have absorbed a catalog of influences that spans from Kubrick to Kaurismaki, Python to Pinter, Joseph Heller and beyond

Tiger Award winner for Anatomy of a paperclip (2013), Ikeda returns to Rotterdam with a funny tale set in Tsuhiramachi, a small village at war for decades. No one can remember the cause of the conflict or exactly how long it lasted, especially the distracted mayor Natsume (Ishibashi Renji) who cannot even remember his own son’s name. Hostity is fueled by gossip. “I heard that the people on the other side were barbarians,” says one resident.

It is now universally accepted that every morning at 9 a.m. sharp, a group of soldiers will march to the Tatsukawa River, take up their positions and fire volleys of gunfire at Tawaramachi, another village on the other side of the river. water. The maneuver ends at night around 5 p.m., like a traditional office job. Private Tsuyuki (Maehara Kou) is meticulous in his lackluster daily routine and in carrying out his patriotic duties. He is awakened each morning by the sound of a marching band, walks to Amy’s base, undresses in civilian clothes, serves his community, eats at the same restaurant every night and sleeps soundly before starting all over again.

It’s the arrival of a curious and questioning new recruit Mito (Nakajima Hiroki) that causes tiny cracks in the continued acceptance of the status quo. Perceptions change even more when Tsuyuki is transferred to the marching band. He heads for the shore to practice the trumpet with a plaintive interpretation of the Blue Danube. When there is an answer from the other side of the water, it becomes clear that all may not be there.

Ikeda seems to have absorbed a catalog of influences that spans from Kubrick to Kaurismaki, Python to Pinter, Joseph Heller and beyond. The dialogues are laconic and cut out, the faces of poker betray little and the characters parade in single file like automatons. Everything is calibrated very precisely as the director points out the absurdity of senseless bureaucracy, senseless conflict, and blind obedience to a lost cause. The comedy is verbal and visual; conversations turn into endless skirmishes in sight, an often-repeated running gag revolves around adding and subtracting rice from service bowls, a military commander venting his frustrations by relentlessly slapping his victims on the back.

Cinematographer Ikeda Naoya gives the film a polished look, whether it’s cramped and dark interiors or poetic sunsets by the river. Performances are always part of the game, especially a stage thief Karagiri Hairi who appears to be channeling the late Cloris Leachman as the owner of maniacal restaurant Shiroko.

Sincere in her intentions, Ikeda has a passion for repetition that can melt an idea or a joke. The result is an uneven film that infuriates as much as it pleases.