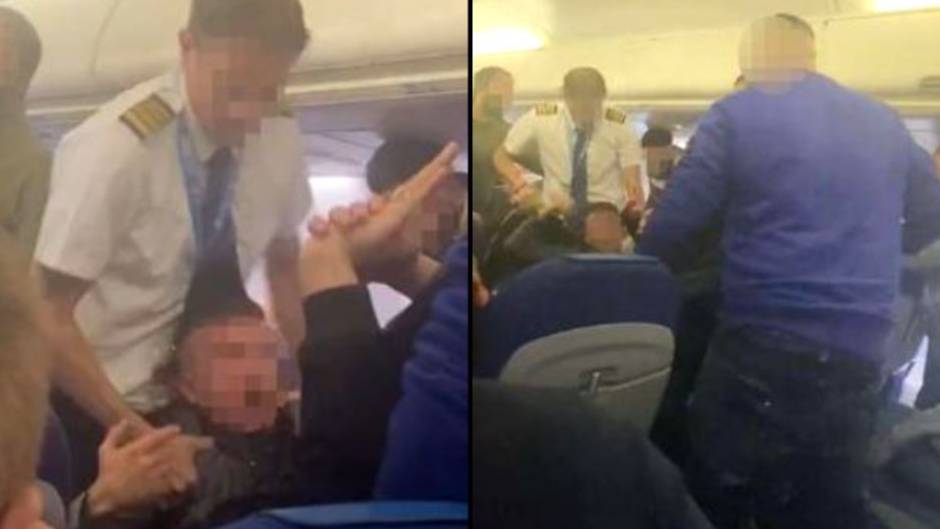 Stunned passengers scream as chaos erupts on flight to Amsterdam

A flight to Amsterdam descended into chaos after a huge fight broke out between passengers. Look here :

The flight departed from Manchester yesterday, May 5, and was heading for the Dutch capital – but the short trip across the North Sea was marred by a fight between two groups of ‘unruly passengers’.

Footage posted to social media – which has been viewed nearly two million times – shows at least four men struggling in the seats and swinging a flurry of punches at each other.

All the while, passengers can be heard screaming and urging the men to pack their bags, as staff and members of the public attempt to break up the fight.

Airline KLM said cabin crew and the captain had to intervene to break up the fight, and everyone involved was arrested on arrival at Schiphol airport.

A spokesperson told LADbible: “[Yesterday] We had unruly passengers on our KLM 1070 flight from Manchester to Amsterdam.

“The captain and cabin crew broke up a fight between two groups of passengers.

“All those involved were arrested upon arrival at Schiphol Airport. No delays occurred.

“KLM does not tolerate any aggression against employees or passengers. We apologize to our passengers who may have been affected by the incident.”

Earlier this week, a man who groped two flight attendants and punched a third on a flight in the United States was jailed.

Maxwell Berry was sentenced to 60 days in jail for his behavior on a Frontier Airlines flight from Philadelphia to Miami last July.

Trouble started after the 23-year-old ordered a third booze and rubbed his empty cup against a flight attendant’s behind.

He then managed to spill his drink on his shirt, went to the bathroom and came out shirtless.

Jordan Galarza, the flight attendant who was hit by Berry, described the 60-day sentence as “a disgusting miscarriage of justice.”

Speaking to WPLG Local 10 News on Tuesday May 3, he said: “You can tell [the taping] looked a little barbaric, but it worked perfectly and no one was hurt because of the way we did what we did.

“He made an enemy of everyone on that flight.

“People on that plane saw justice coming – more than we saw today.”