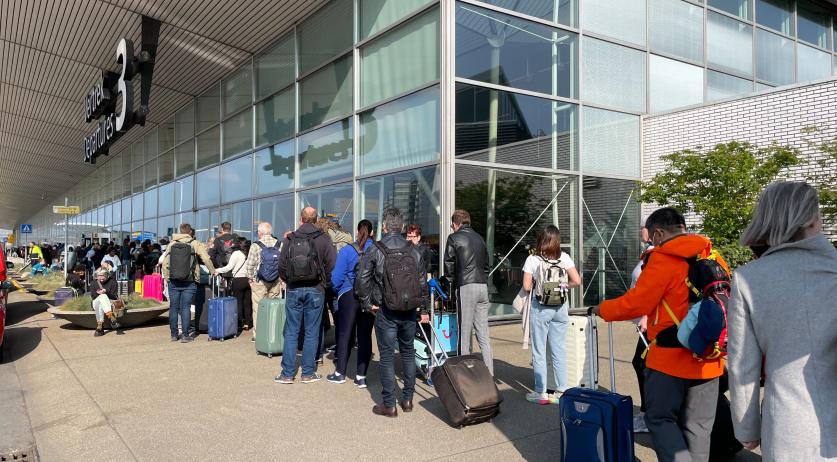 Schiphol estimates that there will be even more people on Sunday than on Saturday. It is asking airlines to take more drastic measures to reduce the number of travelers at the airport, including canceling flights.

On Saturday, Schiphol aimed to reduce the number of travelers by 3,500, while on Sunday the airport is aiming for 5,800 fewer visitors. “We are not there yet,” admitted operational director Patricia Vitalis of Schiphol. However, she said KLM no longer requires cancellations. The airline has already announced that it will cancel 47 flights for Saturday and Sunday.

But other airlines that normally transfer lots of people to Schiphol might be able to use other European airports, says Vitalis. Just like on Saturday, some flights will also transfer to Rotterdam The Hague Airport on Sunday. For now, this only concerns two flights, one from Transavia and one from Corendon.

EasyJet has no plans to change its flight schedule at Schiphol Airport, a spokesperson for the low-cost airline said on Saturday evening. “Although we are not considering canceling flights in advance, we are in discussions with Schiphol on other solutions,” he said. It is unclear what possible solutions are involved.

According to Vitalis, Schiphol is concerned about the safety of passengers and staff in the terminal. It’s so crowded that security “unfortunately” can’t handle the crowds.

On Sunday, she expects around 70,000 departing passengers to pass through security barriers, up 10,000 from Saturday. Meanwhile, all incoming and outgoing passengers, including connecting passengers, will further increase these numbers.

“It was very crowded this morning and there were long queues at check-in counters,” says Vitalis. “People sometimes had to queue for two hours to get through security.”

A look at the departure boards revealed that flights had also been delayed. Schiphol employees tried to steer passenger flows in the right direction as much as possible, and firefighters distributed water to waiting passengers. However, the worst of the crowds passed by late afternoon.

Vitalis recognizes that the situation is “very distressing for travelers”. But she does not rule out the possibility that Schiphol will ask airlines to cancel flights more often this year.

Due to the coronavirus pandemic, the airport is suffering from a significant staff shortage. People have lost their jobs during the pandemic due to less theft for almost two years and not everyone has returned to their old jobs.