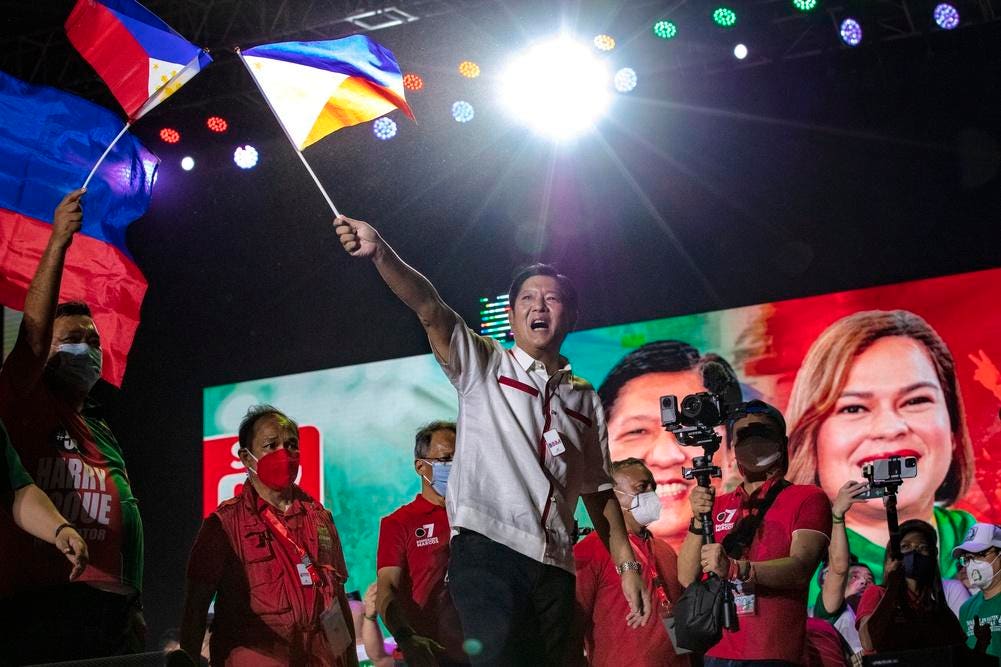 More than eighty percent of eligible voters turned out in the Philippines presidential election, and it looks like a landslide victory for Ferdinand (Bongbong) Marcos Jr.

As they complete the vote tally, several media critics are already trying to poke holes in Bongbong’s landslide victory. Some pointed to the excesses of his father’s diet (36 years ago), while others targeted his 92-year-old mother (Imelda). Some allege a closer friendship with China, but few have spent time examining the erosion of the Philippines’ love of America – an important analysis for a former American colony – where average citizens truly love America. .

Once upon a time, Capitol Hill pushed for closer ties with Manila but, sadly, former pro-Filipino hawks have long since left the building. With Bongbong now on the rise, the US government is taking a fresh look at ways to improve the relationship. As everyone knows, retail inflation and supply chain are big issues here, but there is pressure to reduce retail supply exposure to China, and more especially to find other locations to get retail products. Could the Philippines be an answer to the problem?

As research progresses and the Philippine trade rationale becomes more of an option, Chinese tariffs continue to weigh on the US economy on a daily basis. In addition, the Uyghur law on the prevention of forced labor (UFLPA) (targeting China) goes into effect next month, UFLPA includes a dangerous (rebuttable presumption) clause that warns retailers about deliveries from complex supply chains – shipments that must be “clean” of forced labor – or the importer will be found guilty until proven guilty The problem is that the government cannot answer the basic question that “if companies can’t make everything in America and China is so closely watched, where to get supplies? »

Looking at empty store shelves right now, it remains pretty obvious that America is currently unable to meet our consumer needs. With that in mind, the not-so-surprising revelation is that the Philippines is a logical partner, and the Biden administration should pave the way for a trade deal with a new Philippine government. Business logic sets in, but politicians wonder if Bongbong’s former English upbringing included a poem by Elizabeth Barrett Browning that included the phrase, “How do I love you?” Let me count the paths. Philippine history students are scratching their heads and wondering why the media tries to label Bongbong an outlier, when anyone can just revisit Ms. Browning’s poem and realize that much of the history of the Philippines with the United States has been emotionally charged and eroded. the love we profess to have.

History tells us that the Japanese took control of the Philippines in 1942 when it was still an American colony. The Japanese were ousted by the Americans in 1945 and the nation was granted full independence in 1946. After 48 years of American colonial rule and control, love has often been hard since.

At the end of World War II, the US Congress passed the GI Bill of Rights which offered financial benefits to those who defended the United States. It has been documented that Filipinos fought side by side with American troops, but when the GI Bill was passed it included soldiers from sixty-six different countries and, surprisingly, Filipinos were left out. If veterans groups weren’t helpful in the Philippines, the US Navy wasn’t far behind. Filipinos served proudly – but they were restricted to being stewards until 1971, when the Navy finally realized the mistake and rescinded the decree.

Another distinguished group was the Philippine Scouts – which were formed in 1901 as a military unit, which lasted until the end of World War II. It was an honor to be a scout as they were considered a full US military organization under command. of commissioned American military officers. At the end of the war, Congress passed the “Recision Act” which denied Boy Scouts the benefits promised to veterans. It wasn’t until 1990 that Congress offered naturalization to veterans, and in 2003 health benefits were eventually extended to Filipino-American World War II veterans.

With respect to trade agreements, the US Congress passed the Bell Trade Act in 1946 and the Philippines seriously opposed the “Parity Amendment” which granted US citizens equal rights to Filipinos in certain business transactions. The Bell Act was replaced by the Laurel-Langley Act which lasted from 1955 to 1974. There has been absolutely NO new trade agreement between the United States and the Philippines since the Laurel-Langley Act expired there. is 47 years old.

The Philippines fell out of favor as a retail sourcing country when China became a member of the World Trade Organization in 2008. During that time – in the garment assembly industry alone – more 500,000 Filipinos lost their jobs. Today, many now believe the industry could easily be resurrected under a Marcos administration – especially if the US finally considers a much-discussed free trade deal between the two nations.

As for trade history, when the Korean War broke out, over 7,400 Filipinos fought alongside American troops during the war. South Korea entered into a free trade agreement with the United States in 2007 (called – KORUS). Korea was included as a new trading partner; the Philippines was not even mentioned.

When World War II broke out, more than 250,000 Filipinos fought alongside American troops during the war. While the Trans-Pacific Partnership (TPP) was negotiated under the Obama administration, Japan was to be included; the Philippines were not.

During the Vietnam War, more than 10,400 Filipinos were sent to participate in medical and civilian activities. As the Trans-Pacific Partnership (TPP) was negotiated under the Obama administration, Vietnam had to be included; the Philippines were not.

China, for its part, included the Philippines in its latest trade negotiation called the Regional Comprehensive Economic Partnership (RCEP) but, for now, the Philippine Senate is still deciding whether to join (or not). Philippine President Duterte wanted to “Build, Build, Build” the country’s infrastructure, and the Chinese were eager to help with financial aid from their Belt and Road Initiative. Many newly launched Philippine infrastructure projects were slowly launched and some may never be completed, but the intention was there and the Philippines was ready to accept help from China.

On the other side of potential infrastructure loans, the thorniest issue concerns the ongoing demand for maritime control in the South China Seas between the Philippines and China. In 2013, the Philippines filed a claim over China’s “maritime rights” with the Permanent Court of Arbitration in The Hague. In 2016, the tribunal in The Hague ruled in favor of the Philippines on the 15 submissions: “The tribunal concluded that there was no legal basis for China to claim historic rights to resources in the maritime areas. inside the nine-dash line.” China, for its part, did not accept the decision.

It’s easy to see why there’s no hard or fast answer as to what’s right or wrong in the US/Philippines relationship, and media critics should approach it fairly. The bottom line is that America can help the new administration or, if not, China probably will. The hope of a Marcos administration will be stability, prosperity, and a better relationship with the United States.

A long-delayed free trade agreement between the two countries would certainly be a good start – as it would benefit both countries.

The poem still rings true: “How can I love you? Let me count the paths.