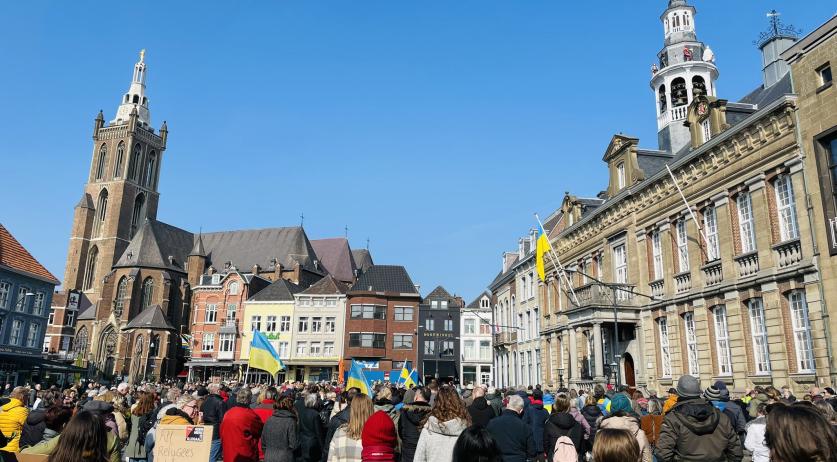 Demonstrations against the Russian invasion of Ukraine took place in several cities on Sunday. In Amsterdam and Roermond, these included marches through the city for peace in Ukraine.

The march in Amsterdam was organized by the peace organization Pax and the group of Ukrainians in the Netherlands, and started at 2 p.m. in Dam Square. Past protests have also taken place in the square since the start of the war. Speakers from Pax, DeGoedeZaak, Free Press Unlimited and other organizations were featured, according to the event’s Facebook page. The protest was to last until 5 p.m.

The march to Roermond started at 1:00 p.m. Deputy Mayor Marianne Smitsmans read a poem and delivered a speech before the protest began. She called the war a “jet black page” in European history.

“What does this war mean for our security and our lives? The residents provide space for the reception of refugees. Residents call for an extra bedroom. [It is] comforting,” Smitsmans said, according to 1Limburg.

Protesters laid a wreath on the steps of the town hall, reports 1Limburg. Then the Ukrainian national anthem was played and a moment of silence was observed for the victims of the war, after which the participants walked through the city center. Protestors were asked to bring sunflowers, the symbol of Ukraine.

Around 150 protesters also gathered in Maastricht, as they did last week, 1Limburg reported. Last week, demonstrations in support of Ukraine also took place in Amsterdam, Nijmegen and The Hague.