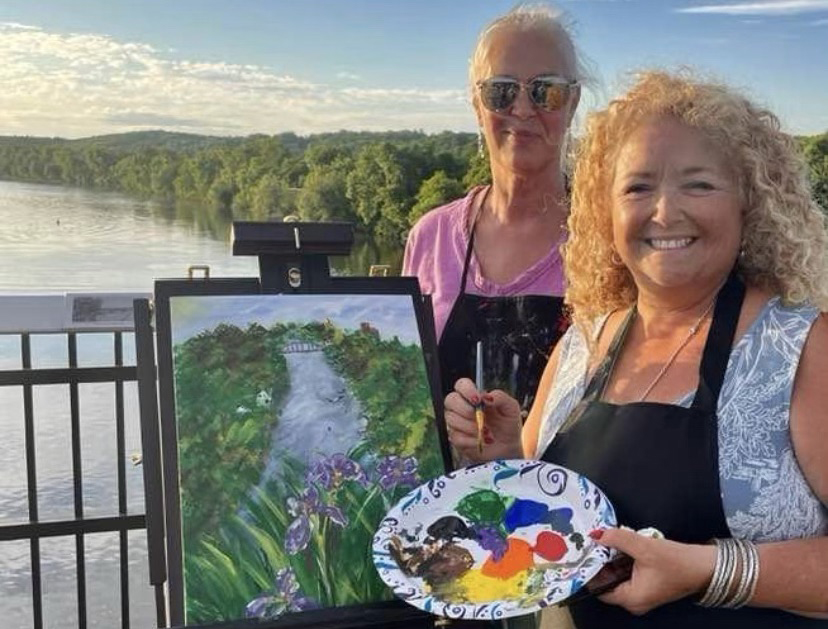 Amsterdam artist Gail Talmadge felt the free open-air classes on the canal would go down well. But not as well.

“I thought it would be popular. I had no idea how popular it would be,” Talmadge said.

She recently began leading “Paint Along the Canal” sessions as part of the New York Power Authority and State Canal Corporation’s “On the Canals” programs, which offer an array of free activities throughout the city. State.

Painting sessions, which are offered throughout the summer, were filling up quickly when The Gazette spoke to the artist last week.

At a young age, Talmadge doodled often and art remained one of his interests. She studied Sustainable Design at SUNY Empire State College and recently earned a Masters in Art Education from the University of Florida. For the past eight years, she has owned and operated Taste and Paint, a small business that offers painting lessons throughout New York State.

Previously, she was an antiques dealer and painted furniture and accessories. She also painted murals and portraits of pets.

Talmadge jokes that she will paint just about anything, although plein air style painting is a recent addition to her repertoire.

Painting outdoors, rather than leading paint-and-sip style lessons, comes with the added challenge of an ever-changing environment.

“It could change from minute to minute, depending on where the sun is shining or what you’re looking at,” Talmadge said. “My first class, I had 20 people come in, and if you stand at the first place where the easel is, and then you go to where the 20th person stands, what you see at each easel is [a] completely different scene. This leads to a variety of landscape portraits by the time the session is over.

Weekly “Sunset Painting” sessions are scheduled on Thursdays at the Mohawk Valley Gateway Overlook Bridge and are among the most popular classes. Weekend sessions are also planned at Yankee Hill, Schoharie Crossing State Historic Site.

“A lot of people don’t even know this place exists. I go there every day to walk my dog,” Talmadge said. “There are locks, there is the river [and] there’s actually an old general store from the 1800s. It’s a hidden gem that no one knows about.

Also on the program are sessions at Hudson Crossing Park and the Mabee Farm Historic Site. Although many courses are full, Talmadge recommends anyone interested check online at canals.ny.gov/onthecanals for openings.

She hopes the sessions will inspire others to keep painting.

“People always tell me, when I have my taste and painting classes, or now with the outdoors, ‘I have no talent. I can’t draw a stick figure. And once they come in a class and they do it, 99% of people say, “Oh my god, I did so much better than I thought. . . . That’s as much [about] art because it’s about recreation and fun, and trying something new. If a few people start doing it on their own, even painting their house, that’s something I feel like I’ve helped.

This has already happened with some students who have attended the sessions.

“A lady said she hadn’t painted for eight years since her father’s death. Another woman hadn’t painted in about 15 years because she had never found anything she wanted to paint, but they really enjoyed the peace and quiet of the painting and its calm,” said said Talmadge.

Beyond the outdoor sessions, the On the Canals program offers statewide excursions, including guided paddle/pedal tours with Upstate Kayak Rentals in Halfmoon; and historic canal cruises in Herkimer, among many others. For more information, go to canals.ny.gov/onthecanals.