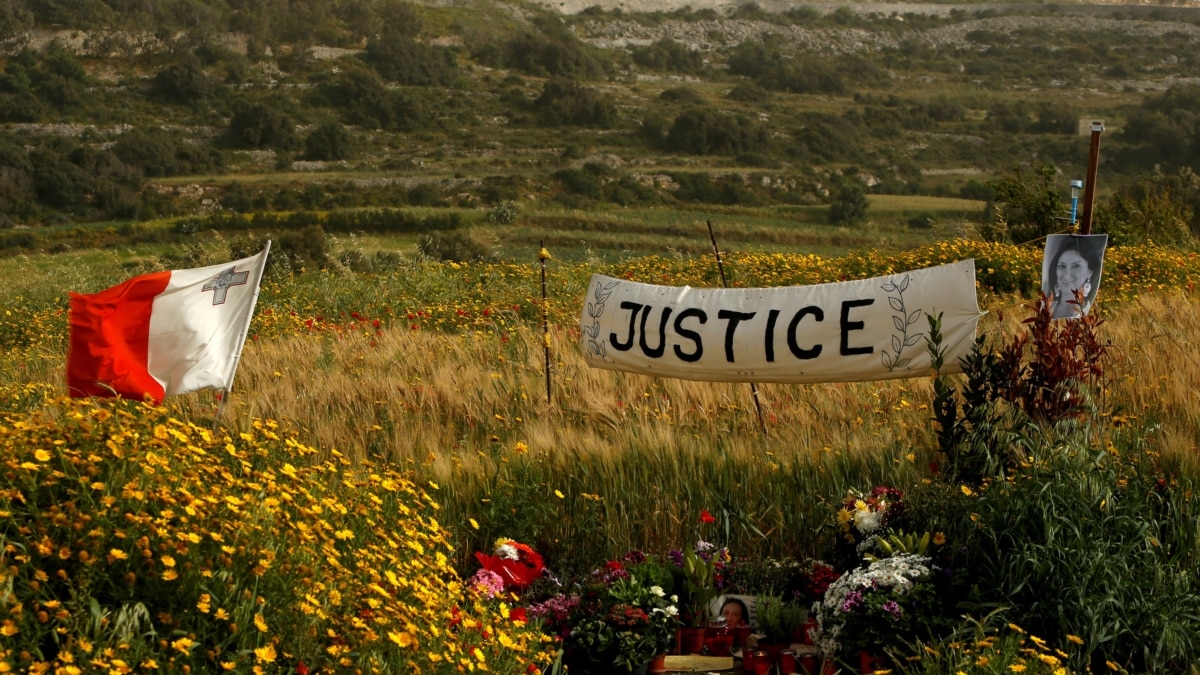 New court in The Hague to investigate killings of journalists

For four years, the family of Daphne Caruana Galizia has been fighting for justice for the blogger, killed by an explosive device near her home in Malta.

“Nothing prepares you for this. There is nothing in the world that can tell you what it is,” the journalist’s sister, Corinne Vella, told VOA.

Since Caruana Galizia’s death in October 2017, Vella has helped lead a foundation fighting for justice in this case.

This slowness towards justice in such cases is a determining factor in the establishment of a People’s Court in The Hague.

Created by a coalition of press freedom groups, the court is due to start hearing cases next month, giving many families and advocates hope that widespread impunity in the killings of journalists will be addressed.

Since 1992, more than 1,400 journalists have been killed, and in eight out of ten cases no one has been held responsible, according to Free Press Unlimited, one of the organizations behind the tribunal.

“To be honest, I was not aware of the number of attacks on journalists,” Almudena Bernabeu, who will be the lead prosecutor, told VOA. “I think the need for this tribunal struck me as frankly an effort to make it known and give it a voice.”

The problem of impunity touches even high-profile cases, like that of Jamal Khashoggi, a Saudi Washington Post columnist who was killed at the Saudi consulate in Istanbul three years ago. His fiancee, Hatice Cengiz, is expected to be one of the many key witnesses who, along with relatives of Caruana Galizia, will testify in the new court.

Efforts to seek justice in the Khashoggi case did not go far enough, critics say.

In another case, Turkey translated several senior Saudi officials in absentia, but not Saudi Crown Prince Mohammed bin Salman. He has been widely accused of approving of Khashoggi’s murder.

Reports from the US Central Intelligence Agency and a UN special envoy both link Salman to the murder, but he has consistently denied any involvement.

Bernabeu, who has a background in human rights law and co-founded the Guernica Center for International Justice, which defends the rights of victims in court proceedings, describes the lack of justice in these cases as a kind of “double impunity”.

In addition to protecting officials who may be responsible for murders of journalists, governments that fail to conduct thorough investigations can also protect themselves, she said.

“Although they are not the ones being attacked or the object of a bad investigation, they are protecting themselves for the future,” she said.

The court’s first hearing is scheduled for November 2 – the United Nations international day to end impunity for crimes against journalists.

It will focus on the cases of Lasantha Wickramatunga, Miguel Ángel López Velasco and Nabil Al-Sharbaji, who were murdered in Sri Lanka, Mexico and Syria respectively.

All three addressed controversial issues. Wickramatunga, then editor of a weekly known for his criticism of the government, had also received multiple threats.

Syria and Mexico have a high number of journalists murdered in the course of their work. But murders can happen in countries deemed more stable or safer, experts say.

“It doesn’t have to be a country in conflict – in the sense that we mean conflict in the traditional sense of armed conflict – for it to be a problem,” said Gypsy Guillén Kaiser, director of communication and advocacy for the Committee to Protect Journalists. VOA.

Vella notes that her sister’s murder happened in what many would consider a stable Western democracy.

“No one expected something like this to be possible in a European Union country,” she told VOA. “We can only assume that if it’s bad in places that traditionally protect rights, values ​​and freedom of expression… it can only be worse in places that have none of these benefits.”

Caruana Galizia was investigating the Panama Papers and corruption at the time of her death.

Malta arrested three suspects and sentenced one in February to 15 years in prison for involvement in the case. In August, Malta announced that a prominent businessman whose Caruana Galizia reporting was linked to the Panama Papers would stand trial for his murder. A date for the trial is pending.

But a public inquiry this year indicated that the Maltese government should ‘take responsibility’ for his murder and the impunity that followed.

The People’s Court will not have the power to punish or convict anyone, but those involved claim that the process of investigating the circumstances and the suspects involved will benefit press freedom around the world, even s ‘Heads of government are unlikely to appear in court themselves.

“It’s a question of embarrassment. There is a lot of power when you publicly name, out loud, a country that has been irresponsible or authorities who have neglected a particular investigation,” said the Bernabeu. “Nobody likes to hear this about your own systems and your own institutions. I think it helps to name these things as they are and release them in the public sphere.”

For families of journalists like Caruana Galizia, another benefit is keeping the names of victims in the headlines and putting a human face on the statistics.

“One of the most important things that can happen is to keep the focus on individual cases so that they aren’t seen as just a statistic, that people remember you talking about an individual’s life. “said Vella.

“A lot of the journalists who have been targeted and killed for their work are people with a history of threats. Our hope really is that in the future the threats will be taken seriously,” she said.

Molly-Mae Hague shoppers £ 3,000 at Selfridges while Tommy Fury is out in Las Vegas