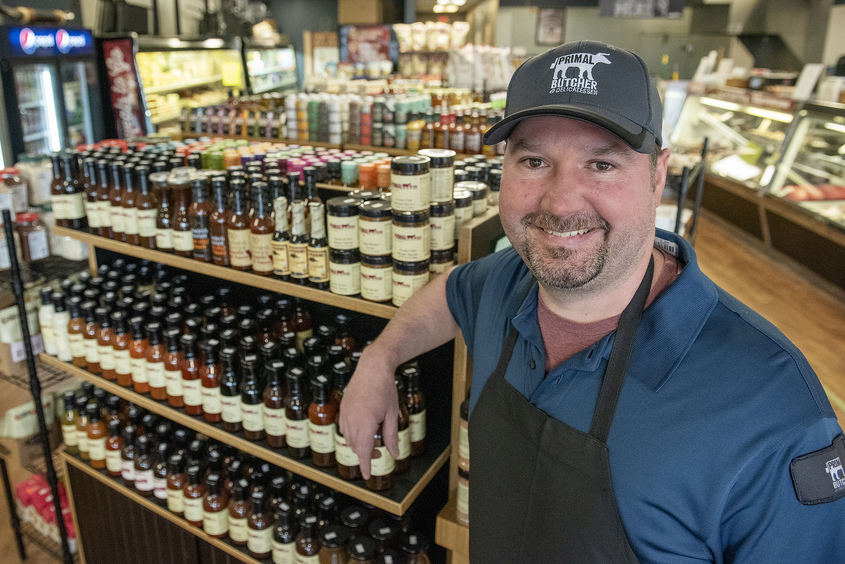 ALBANY — An Amsterdam doctor who refused to wear a mask at a Wilton butcher shop is suing the shop manager for refusing to sell him a steak unless he wore a mask.

The federal lawsuit centers on a brief interaction at Primal Your Local Butcher on Dec. 17, five days after Gov. Kathy Hochul’s order (since overturned) that New York businesses must require all customers aged 2 years and older wear a mask indoors or verify that anyone 12 years of age or older is fully vaccinated against COVID-19 before entering.

Dr. David Kwiat is an ophthalmologist who lives in Saratoga County and practices in the city of Amsterdam. He is representing himself in the case, which seeks at least $250,000 in damages from store manager Jason Houle for shame, stress, embarrassment and loss of appetite resulting from what he alleges is discrimination and a violation of civil rights.

Primal owner Kevin Wickert told the Daily Gazette he would pay to defend Houle against the lawsuit and called it “outrageous”.

Kwiat said the case is about establishing that the mask rule is unconstitutional, more than it is about money.

Kwiat and Houle said their brief interaction a week before Christmas was polite.

The lawsuit filed by Kwiat in federal court in Albany spans 39 pages, much of it devoted to laying the groundwork for his claims by attempting to establish that the pandemic responsible for the deaths of 933,000 Americans is a hoax. and that some of the measures taken to combat it are wrong.

Many of his arguments will sound familiar to those who call the pandemic a scam and oppose efforts for a population-based response, such as public masking or mass vaccination. They understand:

Early mortality predictions were too high, death toll is artificially inflated, there are no accurate COVID tests, vaccines have not shown efficacy or safety, natural immunity is stronger , more people die each year from the flu without warning, masks do not prevent the spread of airborne germs, masks cause a buildup of carbon dioxide which can harm those who wear them, masks have caused the death of children from lack of oxygen, etc.

The various allegations would, if proven, constitute violations of various federal laws or criminal and tortious offenses under the laws of the State of New York.

Wickert, owner of Primal, said Tuesday he was unsure what his next step would be.

“I have a professional insurance policy,” he said. “I’m waiting to see if they accept this or dismiss this as a claim.”

Wickert said he spoke informally to friends in the legal field who said the lawsuit wouldn’t fly, especially in federal court. If he has to retain counsel, the first step would likely be a Rule 11 letter asking for costs and damages if Kwiat doesn’t drop the case immediately.

Wickert said he was sued four times for exaggerated claims in his 21 years as a business owner.

“Those were ridiculous, and they’re like Brown v. Board of Education versus this one,” he said, referring to the landmark civil rights case in the early 1950s.

“It sounds so outrageous – we’re selling pork chops. We do not conspire with the state. We don’t mess with anyone.

Wickert said his two Primal locations, in Wilton and Guilderland, were open daily during the pandemic and had a tiered approach to hiding the rules when the state enacted them: The customer can enter with a mask; walking without a mask and donning a free mask provided by staff; phone in an order and sit unmasked (or masked) in the parking lot while staff carry him to their car; or have Primal deliver to their home, where they can set their own mask policy.

Houle said he offered Kwiat the first three options, but Kwiat declined. His feeling is that Kwiat wanted to be denied service.

(Kwiat says Houle didn’t offer take-out parking, but he would have rejected the offer if Houle had.)

“From the vibe I got as he left,” Houle said, “he was looking forward to it happening. He was overconfident about how he left.

Houle said he gave Kwiat his business card when Kwiat asked his name. Kwiat said “See you in court” as he walked out, then took a photo of the window sign announcing that Primal was complying with the state’s Dec. 13 mask mandate, Houle recalled.

Houle said he’s had to do a lot of coaching of his staff so he can soothe rather than exacerbate already frayed tempers over the past two years, and it’s been a stressful time.

But there was only one other customer who took a stand on the mask mandate issued in December, he said.

“For the most part, everyone goes with the flow,” Houle said.

When asked if he would obey a mask mandate passed by the New York State Legislature and signed into law by the governor, Kwiat told The Gazette on Wednesday that he would not because such a law would be unconstitutional.

“You cannot legally restrict someone’s breathing. You can not do that. It is criminal,” he said.

When asked if he wore a mask during surgery — which is not mandated by state law but is an accepted medical best practice and a requirement of some health organizations regulations – Kwiat replied that he does and suffers from headaches as a result.

He expressed reservations about speaking to a reporter, saying the mainstream media tends to report only the official and widely shared views.

Groupthink is not correct simply because the majority of people subscribe to it, Kwiat said. Just look at Nazi Germany, he added: The prevailing view there was not right.

Asked about the logical extension of this – comparing being forced to cover your mouth and nose in a meat market to being forced to breathe Zyklon B in a concentration camp gas chamber – Kwiat cut off the interview, saying the reporter was misrepresenting the point he was making.

He brought an interview with WNYT on Wednesday to an equally abrupt end.