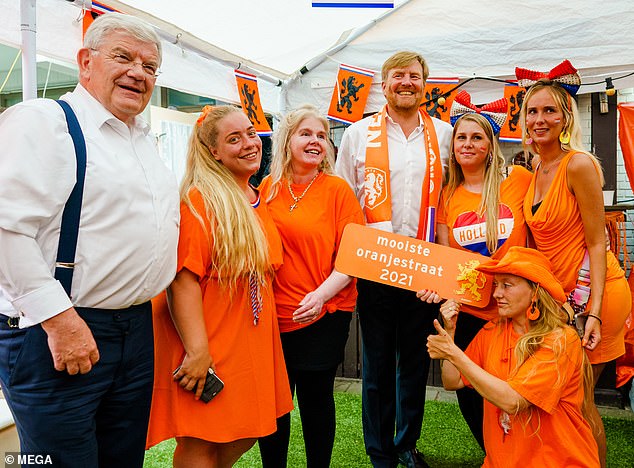 Orange you are happy to see me! King Willem-Alexander joins delighted football fans at the Marktweg in The Hague ahead of the Euros match between Netherlands and Austria

By Latoya Gayle For Mailonline

King Willem-Alexander delighted Dutch football fans today as he joined them for the pre-match celebrations in The Hague‘s Marktweg district today.

The royal, 54, and Mayor Jan van Zanen of The Hague were introduced by brothers Danny and Raymond Zwennes, who were responsible for initiating the decoration of the Marktweg.

The neighborhood won the prize for ‘The most beautiful orange street in the Netherlands‘ following a campaign to decorate the streets for the European Football Championships.

King Willem-Alexander looked polished in a classic white shirt and black pants, and added a vibrant patriotic orange scarf to embrace the theme.

King Willem-Alexander, 54, visited the Marktweg in The Hague today. Pictured: The Dutch royal with football supporters

The district was selected as “the most beautiful orange street in the Netherlands” following a street decoration campaign for the European Football Championships. Pictured: The Dutch royal with excited football supporters

King Willem, whose wife Maxima was not present, posed with football supporters ahead of tonight’s European Championship game in which the Netherlands faced Austria.

During the royal visit, Danny and Raymond explained that they have taken care of the decoration of the streets of all the European and World Championships for 30 years.

The brothers said they visit local residents for consultation and financial contribution, in addition to talking to local merchants to sponsor the decorations.

The impressive results of the Decorated Street are a joint effort of the neighborhood.

King Willem had a busy day, having also attended the opening of an exhibition at the Amsterdam museum

King Willem ended his visit by entering the garden of a house on the Marktweg, where residents can watch matches during the European Championship.

The Dutch royal family had a busy day after opening an exhibition – “The Golden Coach” – at the Amsterdam museum.

The tour began with him receiving the first copy of the book De Gouden Koets, followed by a guided tour by the director of the Amsterdam Museum, Judikje Kier.