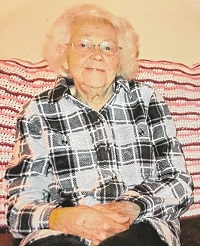 JosÃ©phine Eleanor Mroczek, 101 years old, from rue Edson,
Amsterdam, NY passed away on Thursday, December 30, 2021
at St. Mary’s Hospital after a short illness.
Born November 26, 1920 in Amsterdam, she
was the daughter of Eleanor (Alibozek) and Frank
Karandyszewski and has lived his entire life locally and
attended local schools. She had been employed by
General Electric Company in administration. After
that she was named Montgomery County
Clerk of the Family Court by Judge Robert Sise. After
she worked under the guidance of Judge Gene Catena as a court
Reporter then chief clerk retiring in 1985 after
23 years of service.
She was a communicant of the Saint-Stanislas church
and member of his Rosary Society in addition to being
a pierogi angel for many years in addition to being
member of the Polish American Veterans Ladies
Auxiliary and the Polish National Alliance.
She loved traveling to Poland, Italy, Florida, Las Vegas,
New York and many bus tours. She also appreciated
local casinos, play bingo at the Inman Center
and Elks Club and Scratch Tickets.
On June 29, 1952, she married Stanley
Mroczek until her death in 1993. She is survived by
by his daughter Elaine Kroup, his son Francis Mroczek and
grandson Jason (Donna) Kroup all from Amsterdam.
Nieces, nephews and cousins â€‹â€‹also survive.
A Christian funeral mass will be celebrated on
Tuesday January 4, 2022 at 11:30 am in Saint-Stanislas
Church with Reverend O. Robert DeMartinis
officiating. Call hours will be earlier than
funeral mass from 10:00 am in Amsterdam
Funeral Chapel, 13 Belmont Place, Amsterdam,
NEW YORK. Due to COVID, masks are mandatory. The funeral will be
be at the Saint-Stanislas cemetery.
Commemorative contributions can be made to Saint-Stanislas
Church.

The Rotterdam International Festival will be online for health reasons