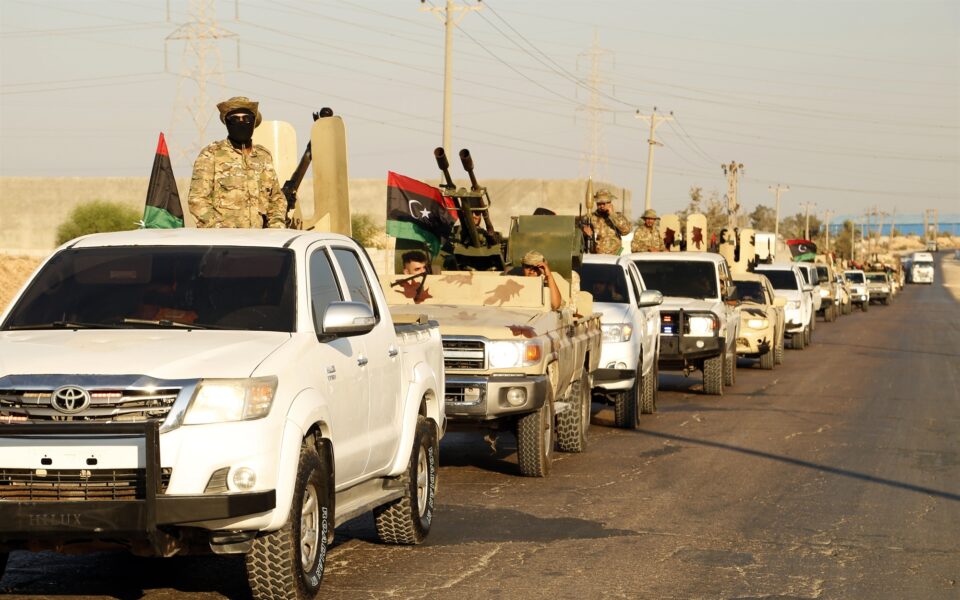 Libyan forces take part in a military parade in the city of Misrata on August 9. It is doubtful that a regular and legitimate Libyan government would want to cancel a very advantageous agreement, such as the one with Turkey, and replace it with another, this time with Greece, the author says. [Yousef Murad/AP]

Turkey has been trying since 2019 to flesh out its “blue homeland” (Mavi vatan) concept and consolidate it with a series of fait accomplis, knowing that neighboring countries and external forces are very unlikely to support it.

But, taking advantage of the weakness and almost hopeless position of successive Libyan governments, the civil war and their need to survive in an extremely unstable environment, Turkey acted decisively, offering economic, military and diplomatic support to help them win, come hell or high water. With the strategic advantage of international recognition and invoking the emergency situation, the Tripoli-based governments have concluded a series of agreements, including the delimitation of maritime jurisdictions and, most recently, a preliminary agreement granting drilling permits to the Turkish state oil company TPAO on land and at sea. The agreements were signed against the will of the Benghazi-based parliament, which declared them null and void, without being able to stop their implementation.

Two agreements directly infringing on our sovereign rights, both those defined by the Egyptian-Greek agreement on the delimitation of maritime exclusive economic zones and those potential ones, therefore remain on the table. Thus, Turkey can exercise its “rights” stemming from the tenuous 2019 delimitation agreement with the government in Tripoli, presenting Greece with a major challenge.

With our own influence on the government in Tripoli near zero and that of Turkey proving durable and particularly effective, our main hope is that the elections in Libya will bring about a change of government. However, given the postponement of the elections and the current situation, it is unclear when the elections will take place and under what circumstances. Greece has, of necessity, placed its eggs in the same basket, that of the rival Benghazi faction, hoping that the next Libyan leader will come from there. But, even if it were to happen, it is doubtful that a regular and legitimate government would want to cancel a very advantageous agreement, like the one with Turkey, and replace it with another, this time with Greece.

Since we cannot appeal to the current Libyan government, we must mobilize those of our partners who have influence in Tripoli to pressure the government to change course. This is a very difficult prospect, given the Tripoli government’s dependence on Turkey. However, given the unconditional support we have given Ukraine in its war with Russia, now is the time to redeem it by asking the United States to go beyond verbal condemnation of the agreements. It is certain that Ankara will insist on their implementation; the United States must do what it can to prevent this and also encourage the Libyans to take the case to the international tribunal in The Hague, in agreement with Greece.

If this seems improbable, I remind you that a few months ago, the government of Tripoli had sounded Greece, through third parties, to seize the court of The Hague on the maritime spaces still not delimited. Greece had rightly rejected the overture; our main argument was that regional stability should be based on legal agreements and settle boundary disputes through dialogue. Greece would be willing to accept an arbitration process in The Hague to resolve legal issues arising from areas of overlap covered by the Egypt-Greece and Libya-Turkey agreements. We must, in any case, prepare the ground for an agreement, ideally with a legitimate and duly elected government. We must take advantage of the fact that no regional power, and certainly not most of the West, wants to see Turkey impose its will on the region through illegal actions, especially with the impending war in Ukraine. Thus, we should ask the United States, as a reward for our position on Ukraine, to extend its “red lines” vis-à-vis Turkey beyond the Aegean Sea to the Libyan question; on this point, we would have Egypt and Israel on our side.

Operationally, our options to prevent Turkish explorations are limited and will not deter Ankara, which will also invoke Libya’s invitation to explore. So, we must act decisively, first of all by activating the law of 2011 which de facto fixes the limits of our continental shelf including Crete (Turkey claims that the islands cannot have a continental shelf). At the same time, we should start explorations south of Crete to check our oil and natural gas reserves. It should not be thought that Libya will refrain from submitting the coordinates of its claimed maritime jurisdiction to the United Nations; in the absence of a remedy in The Hague, such actions are unavoidable.

Although the extension of our territorial waters south of Crete to 12 nautical miles, from the current 6, seems risky, given Turkey’s threat that such a move would be a cause of war, it is necessary, for two reasons: to prevent “explorations” such as those of the research vessel Oruc Reis off Kastellorizo, in the area between 6 and 12 nautical miles off the coast and to increase the cost for Turkey by an increasing expansion of the coastal area.

We are partly responsible for the current situation, because we did not develop a strategy for the expansion of our territorial waters in time, we did not activate our own hydrocarbon exploration program – we did not done a single exploratory drilling since 2011 – and we haven’t signed a delimitation agreement with Libya, even though we’ve been negotiating since 2005.

Constantinos Filis is director of the Institute of International Affairs and associate professor at the American College of Greece. “The Future of History”, edited by Professor Filis, is available from Papadopoulos Publications.