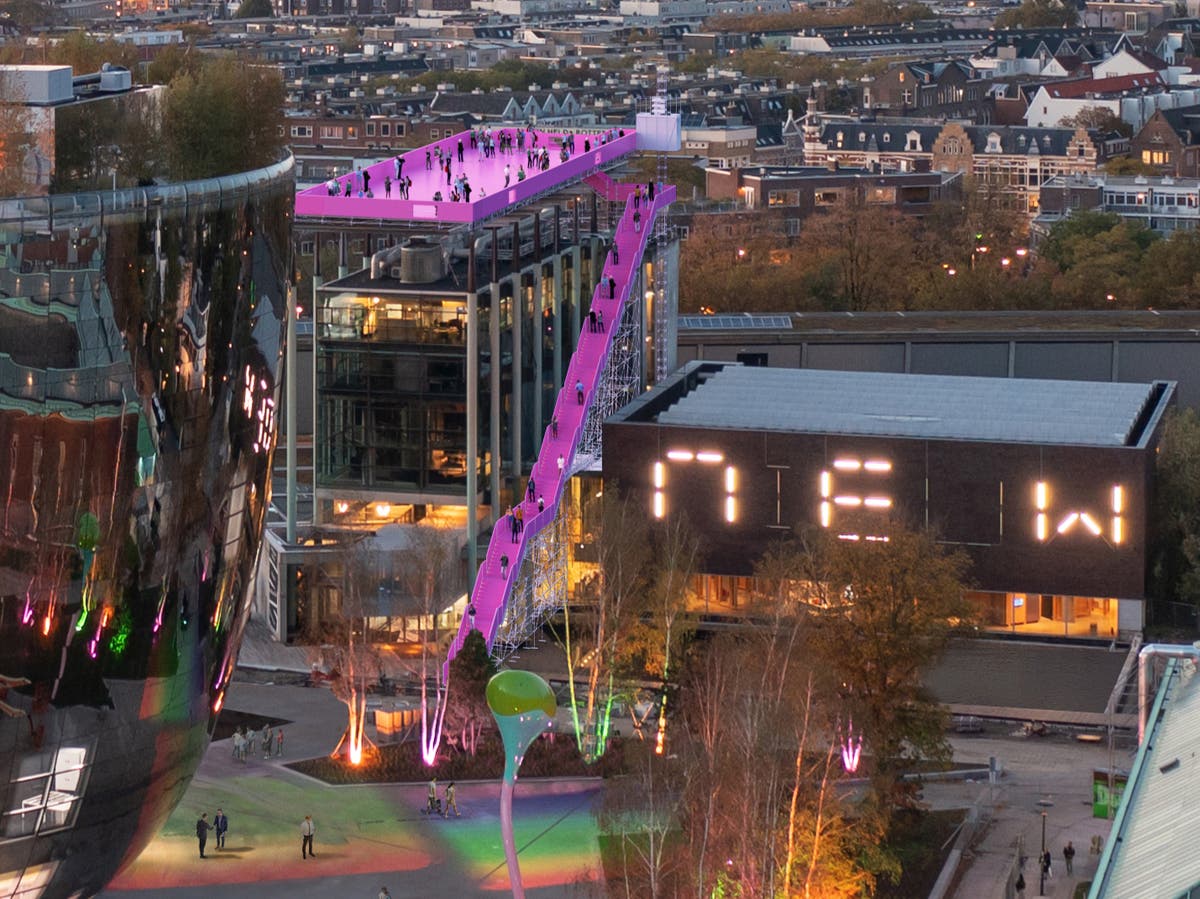 Jhe agricultural scene before me is quintessentially Dutch: tulips and narcissus bow to the sun, rows of vegetables poke their frilly heads through the earth, and chickens peck snacks from the ground. Only, I am in the heart of the city of Rotterdam. I have just crossed the six traffic lanes of the Coolsingel and climbed the concrete steps of a 1960s office building to a seven-story roof.

The 1,000m² DakAkker (rooftop plot), home to the lively brunch café Teds, is the largest rooftop farm in the Netherlands. From rooftops like this, visitors can marvel at the patchwork city; mirrored skyscrapers and brutalist behemoths eclipse the few remaining monumental buildings, acting as contrasting emblems of Rotterdam’s past and present.

Best known for its spectacular architecture that rose from the ashes of the devastation of World War II, the Netherlands‘ second-largest city now faces a new threat as rising sea levels, caused by the global warming, once again tests the resilience of the city. Yet Rotterdam’s innovative solutions to the challenges it faces only make it more of a destination.

The Depot building, for example – a colossal mirrored bowl overflowing with art treasures, whose small footprint is designed to withstand flooding – won numerous awards when it became the first publicly accessible art depot l last year, housing the extensive collection of Boijmans Van Beuningen. of Dutch works while the waterlogged museum is remodeled. The Depot has no rooftop allotment; it has a forest instead.

High and dry is a good thing when your city has one of Europe’s greatest flood risks, and Rotterdam’s Rooftop Days Festival (May/June) is an annual celebration of busy life with concerts on the rooftops, camping, restaurants and dancing; and this year, a breathtaking rooftop promenade, with purpose-built skybridges linking the roofs of iconic downtown buildings.

Come in June and you will also witness Rotterdam Architecture Month. The headliner is The Podium, a temporary stage on the roof of the Het Nieuwe Instituut architecture and design museum, accessible via a striking exterior staircase that spans the building like a neon pink belt.

But fancy roofs aren’t just for attracting visitors. With an 18 km² landscape of flat roofs, the city also sees greening at altitude as a mitigation against global warming. “85% of our city is below sea level, which highlights the need to adapt to the climate,” said Deputy Mayor Vincent Karremans. “One of the ways to do that is to add more green.”

Seven projects – high and low – costing over €300m (£254bn) will transform this car-centric city, adding 100,000m² of parkland in a decade. As well as boosting tourism, the new landscape will capture more CO2, reduce heat stress, promote biodiversity and absorb around 4,400 m³ of flood water. “It helps us achieve multiple goals in one,” says Karremans.

In the Delfshaven district, visitors can now take a guided tour of the city’s eight-hectare Dakpark, a rooftop park with a herb garden, beehives and free-roaming sheep, which has become a place of popular meeting. Meanwhile, meandering north of Rotterdam, and visible from my vantage point at the DakAkker, is a disused railway viaduct being converted, thanks to local architects De Urbanisten, into a climate-adaptive Hofbogenpark – a 2km leafy alley long with water features due to open in 2024.

Huddled under the 189 arches of the viaduct, there is already heaps to explore. Taste a staple of the Dutch diet at We Say Cheese; spend an evening at the BIRD, concert hall with restaurant and garden; or browse vinyl at Clone Records and De Oorzaak. This once seedy part of town now even has its own Michelin-starred restaurant, FG Food Labs.

For climate-friendly cuisine, try Aloha in the Kralingen district, a restaurant with a waste-reduction concept located in an abandoned 1980s tropical water paradise, now part of Blue City, a hub for conscious entrepreneurs of sustainable development. Inventive sharing plates follow one another, including a vegetarian version of Dutch bitterballen (breaded balls with a sticky centre) made with oyster mushrooms grown on coffee grounds and served with a surprisingly tasty coffee mayonnaise (€6.50).

From there, I board an electric water taxi for an exhilarating ride under the harp-shaped Erasmus Bridge and upriver to the Rijnhaven, a peaceful harbor exploring ways of working with the ubiquitous water that defines Rotterdam and the put in danger. A 70 million euro redevelopment project is underway here to create 18 hectares of tidal parkland with city beaches and floating parks, as land use shifts from industrial to ecological and social.

Across the water, I spot Wikkelboats: tiny floating homes built from recycled cardboard — some with hot tubs — and the latest trend in climate-friendly accommodation here.

There is more floating fun to be had in the Wijnhaven to the north. The floating H₂OTEL has buoy-shaped boats with bars that can be skippered around the harbour, while the quirky gastropub and concert venue V11, a 1950s “lightship” topped with a red-painted lighthouse fireman, rents electric hotTugs – adjustable steaming-hot Jacuzzis that keep passengers warm whatever the weather.

Back in the Rijnhaven, the only hint of the neighborhood’s sordid past is the cheeky-named Putaine (prostitute) restaurant, where I enjoy a glass of champagne. Furnished in dusty pink and featuring a natural swimming pool, this chic, glass-walled property is part of a gigantic complex of floating wooden offices, which houses the international headquarters of the Global Center on Adaptation.

For dinner, however, I go to Whore’s big sister, Heroine, back on the mainland. Here, I sit down to a five-course menu (€58) with melt-in-the-mouth appetizers and a jaw-dropping dessert of apple sorbet, peanut cream and crispy beetroot – all served in a carcass of ominous (but listed) a building typical of the functionalist architecture that is ubiquitous here and too easy to overlook.

In fact, the city has been undersold for so long, it’s no wonder it wants to scream from the rooftops. “We have really come a long way in the last 20 years in Rotterdam,” says Leon van Geest, director of Rotterdam Rooftop Days, as we visit the Groene Kaap housing estate in Katendrecht, recently voted the best roof in the Netherlands. “It’s not just for tourists, but for the people of Rotterdam to be proud of their city.

A direct Eurostar service from London reaches Rotterdam in around four hours.

Deborah stayed at The Slaak Rotterdam and was hosted by Rotterdam Partners. theslaakrotterdam.nl

Rotterdam Rooftop Walk runs from May 26 to June 24, 2022. Rotterdam Architecture Month runs throughout June, but the catwalk will remain open until August 17.