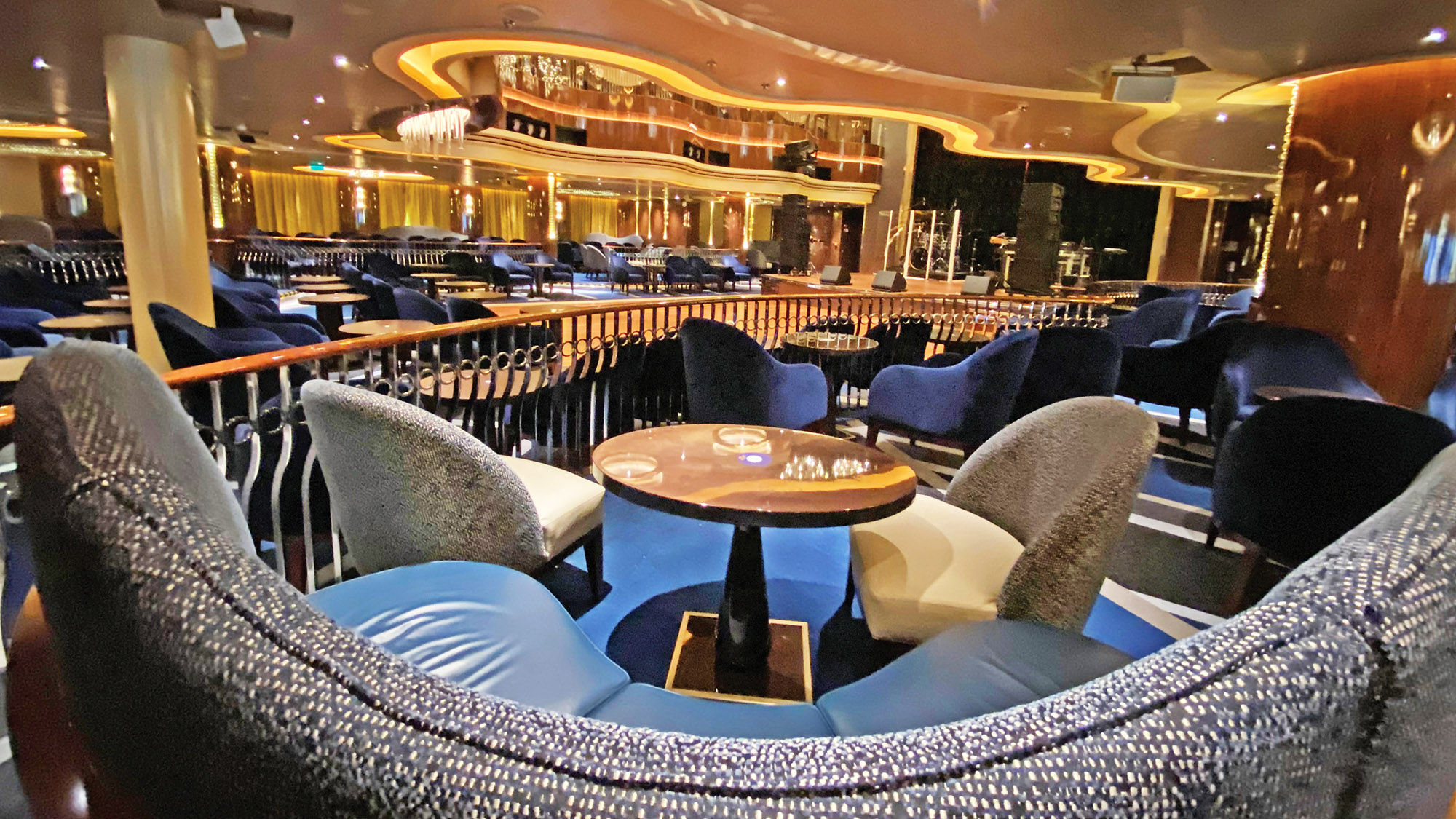 The lights were low at depth on Deck 2 of Holland America Line’s brand new Rotterdam, despite the reluctance of the sun to set. I walked away from dinner in the dining room out back and wandered over to the Rolling Stone Rock room.

I ordered a drink and made myself comfortable. The band’s first live track was “Dreams” by Fleetwood Mac. Then the Eagles’ “Take it Easy”. The moment they got to The Monkees’ “I’m a Believer,” the band shook so hard that a woman’s cosmopolitan vibrated in her martini glass.

A cover band at the Rolling Stone Rock Room is lit up with colored lights during a performance. Photo credit: TW photo by Andrea Zelinski

The long, wraparound couch vibrated beneath me with the bass. Purple, pink and yellow streetlights cast electric hues onto the stage, which reflected off the lead singer’s black leather dress and the bassist’s sequined blazer.

People were singing, the woman with the cosmos was dancing in her crescent moon chair in the front row, and a guy to my right was stomping his feet and drumming on his right thigh.

Nearby, on the same bridge, the BB King’s Blues Club had room only with the band giving the kind of energetic performance I’d expect to find on Beale Street in Memphis as guests swayed on the dance floor. A short distance away, in the Billboard Onboard bar, two pianos fell silent after hours of moving people around to sway in their seats as dueling pianists tickled the keys of hits.

This collection of musical venues and other entertainment spaces is what makes Rotterdam a prime location for themed and charter cruises, said Rob Coleman, senior director of charter and incentive sales for HAL, while he was aboard the ship at the end of May.

On a ship with three concert halls and other spaces that can be turned into dedicated event space, the line is looking at opportunities for music and dance-focused cruises.

“It’s not just scheduled shows. It really gives people the opportunity to walk around and have different experiences over the course of an evening,” he said.

The music is the Rotterdam theme. Photo credit: TW photo by Andrea Zelinski

Music-themed cruises that will take over a HAL ship in the coming year include 50s and 60s sounds, R&B, soul, Irish, Christian and country music, Coleman said.

I can see why. The heart of this 2,668-passenger ship is on the Music Walk, home to four genres of music, including blues, rock, billboard and chamber music. BB King’s shares space with the Lincoln Center Stage, which offers classical music performances, both classical and contemporary.

It’s easy to imagine a chartered blues cruise or other music-themed voyage taking over this ship and offering guests a variety of performers and musical styles in one voyage. I imagine the possibility of a dance cruise with rooms for two steps or a waltz, followed by swing and salsa.

Each space has a unique vibe, from the dark hues and comfy chairs of BB King’s to the electric lights of the Rolling Stone Rock Room that mentally transported me off the ship and into an intimate concert with a front row seat.

The Lido pool on the Rotterdam has a retractable roof allowing events to span three floors when open. Photo credit: Photo TW by Andrea Zelinski

The Rotterdam, delivered a year ago and christened in May, is HAL’s third Pinnacle-class ship. While previous ships in the line have been upgraded to add music offerings, the Rotterdam embodies the evolution of the brand by being built with the Music Walk in mind, Coleman said.

The Rotterdam is also a highly convertible ship, which makes it attractive for charters and other themed voyages. Take the Lido pool area in the center of the ship. By day, people swim in the pool, bask in one of three hot tubs, or lounge on one of two decks. But at night, the retractable roof can transform the area into a three-story event space for people to mingle on the highest deck while connected to activities below, including live music.