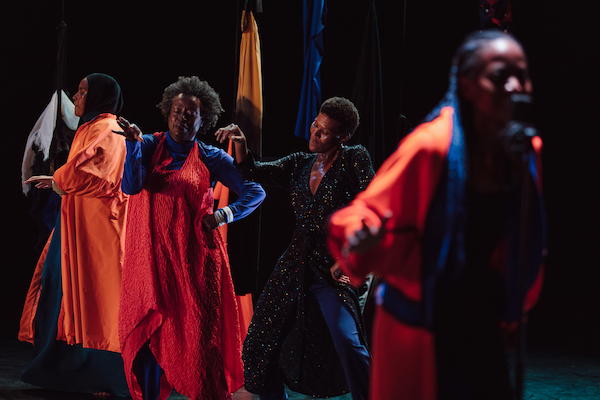 Mailles, by DorotheÃ© Munyaneza is one of the performances of the Holland Festival. Photo: Leslie Artamonow

From June 5, museums, bastides and theaters will once again be able to open their doors to the public. Here are some suggested things to do – and don’t forget to book your ticket online.

Welcome to Holland Festival
To kick off the fun globally, the annual showcase for national and international performing arts, the Holland Festival, kicks off this month, with previews of what’s to come, if the coronavirus allows it. Opera, dance, performance, theater, cinema are all represented in 23 shows in the 74 of the Festivale editing. The well chosen theme this year is: what makes people human? From June 3 to June 28. Website

Shed a tear for Hansken
The only elephant living in Europe in the 17th century, Hansken, an Asian elephant was exhibited at fairs all over the continent. When it came to Amsterdam in 1637, Rembrandt drew it more than once. The Rembrandthuis brought together drawings featuring Hansken by Rembrandt and his contemporaries and retraced his exploits on the continent.

A detail of Rembrandt’s Adam and Eve in paradise, with elephant

Hansken died in Italy from an infection at the age of 26 after a hard life of traveling and performing tricks as cruel as taking down a vat of beer in one fell swoop. The Florence Natural History Museum has its skeleton but even now Hansken’s journeys are not yet over: his skull is also in the Rembrandthuis. From June 5 Website

Hear the word
Het Zwarte Schaap (The Black Sheep) and the English theater STET present two days of oral creation and poetry in English set up by performer DaniÃ«lle Zawadi. Programming in The Hague includes Tha Ra! Nx, Femke Lokhorst, Elisa Lo-A-Njoe and Tyler Koudijzer and there is an open call for people who want to show what they can do. June 12 and 13. Website

Watch the irish playgirl
Playboy became a playgirl in a contemporary adaptation of JM Synge’s Western World Playboy presented by Badhuistheater Amsterdam. The spotlight is on bartender Pegeen, the girl who falls in love with a stranger who comes to town pretending to have killed her father. The play rioted in 1907 for a number of reasons, one of which was the way â€œIrish femininityâ€ was portrayed (i.e. in their nightgowns). We can’t wait to see what Irish femininity looks like now. Website

Take a coach tour through history
The gouden koets or golden coach, a gift to then-Princess Wilhelmina from a grateful nation, including the colonies, on her ascension to the throne in 1898, is on display in the Amsterdam museum after work by 5-year repair which would have cost â‚¬ 6M (instead of the initial estimate of just over â‚¬ 1M).

Its eventful history is explained in the exhibit, from its infamous panels depicting colonial scenes to the ‘waxinelichtgooier’ who threw a candle holder at the coach in 2013 and was awarded 5 months for undermining both the dignity of the royal family and coach. June 18 to February 27, 2022. Website

Discover the tarnished golden age
Much discussed and now finally open to the general public: the slavery exhibition based on the history of the Rijksmuseum. The Dutch role in the slave trade, upon which much of the wealth of the so-called Golden Age rested, is illustrated by the stories of those whose lives were ruined or enriched, such as the Surinamese plantation slave Wally and Oopjen Coppit, married to Marten Soolmans whose family owned a sugar refinery. Coppit and Soolmans had their portrait painted by Rembrandt while Wally died miserably after organizing an escape.

There are ten stories accompanied by over 100 artifacts. Slavery is open until August 29.

See the stories that need to come out
The Instagram account illustrating the lives of those stranded in Greece’s Moria refugee camp (now Moria2, after the camp was moved in last year’s fire) has some 30,000 followers, but few of that. what happens there spreads to a greater number. Public.

The Stedelijk Museum, Foam in Amsterdam and the Nederlands fotomuseum in Rotterdam will present a selection of photos and a series of posters based on photos taken by the Now You See Me Moria collective. The technical imperfections – the photos were often taken surreptitiously using a cell phone – show the urgency of the stories and the need for them to get out, the museums said.

The Moria exhibition will open at the Nederlands Fotomuseum in June (no precise date yet), in July in Foam and in September at the Stedelijk Museum. Website

Meet Marie-Madeleine
Trust the Catharijneconvent in Utrecht to find another sex-religion combo. After last year’s Body Language exhibit featuring vagina-shaped wounds in the side of the redeemer, it’s now the turn of Mary Magdalene, â€œa mysterious amalgamation of sexuality, sensuality and sin; a ray of hope and a feminist icon. ‘

So was she or was she not married to Jesus? the museum asks a little salaciously. From June 25 to January 9. Website

See the fat ladies or men of Malta
You might not be able to make it to Malta this year, but you really don’t have to go any further than Leiden to get a taste of the culture. The Archaeological Museum has returned to the mysterious prehistory of the island by showing finds in the stone temples of Malta, the oldest free-standing monuments in the world.

The artefacts include three examples of “fat ladies,” voluptuous figures who, according to the latest theories, may be men or both sexes. The smallest artifact, measuring 2 centimeters and dating to 3200 BC, represents a loving embrace between two people, a demonstration, the museum’s shoehorns in a Covid reference, of the “enduring human need for contact and affection”. Temples of Malta is open until October 31.

Breathe the 17th century
The Mauritshuis in The Hague (open June 5) invites you to dive into the scents of the 17th century. Thanks to special scent diffusers, visitors can now both gaze at and smell a 17th-century scene, from foul canals to freshly washed laundry.

The exhibition of fifty paintings, drawings and objects revolves around odors, health and hygiene. Ephemeral – smells of colors is open until August 29.

Come to the Cobra
The Cobra Museum in Amsterdam presents 21 flagship works by Mexican artist Frida Kahlo from the Jacques and Natasha Gelman Mexican art collection and around 30 by her husband Diego Rivera and other contemporaries. The exhibition shows their strong links with Mexican culture and the politics of the time, not to mention the stormy relationship between the two artists. Frida Kahlo & Diego Rivera: a love revolution is open until September 26.

Walking and learning in the Veluwe
The De Tien Malen History Museum in Putten is close to the Veluwe health zone and is a perfect stopover for a Staatsbosbeheer walk in this beautiful part of the Netherlands. Putten had seven large houses inhabited by wealthy people who shaped the history of the region and De Tien Malen made them the subject of an exhibition. From June 9.