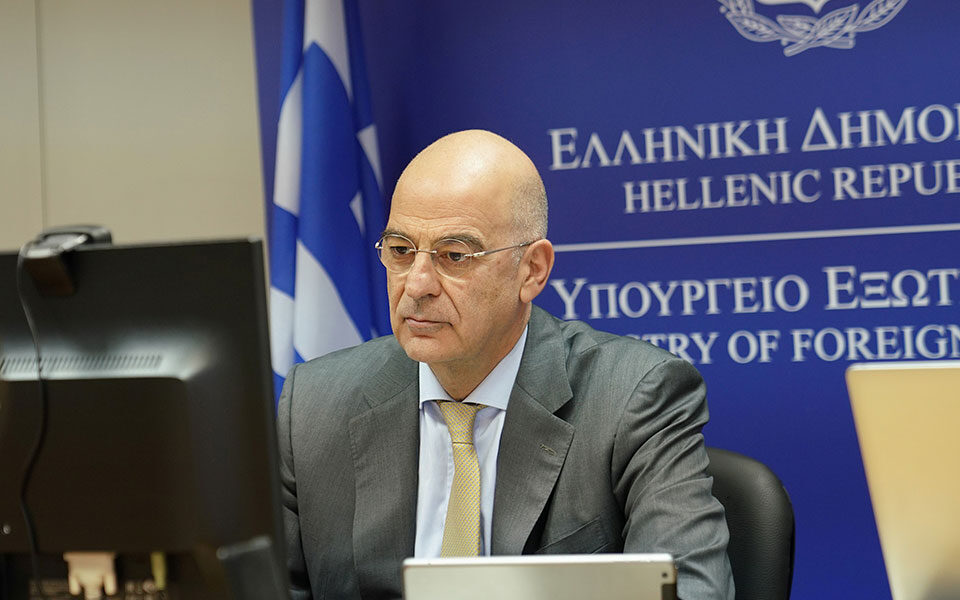 He underlined the importance of UNCLOS for Greece, as well as Turkey’s stubborn refusal to accept and implement UNCLOS, saying that the “Ocean Conference 2024” to be hosted by Greece will highlight light the aspect of environmental protection within the framework of the provisions of the Treaty.

The full address of the Minister of Foreign Affairs is given below:

“It gives me great pleasure to address this year’s Conference, especially on the occasion of the 40th anniversary of the signing of the Convention on the Law of the Sea, UNCLOS.
A Convention to which our country attaches the utmost importance.

The Convention is also known as the “Constitution of the Oceans”, and this description is not a verbal exaggeration. This is a description used by many of my Asian counterparts, among others, as I discovered during my recent visit to Asia. UNCLOS is a comprehensive regulatory framework that guarantees the stability and legality of states’ activities at sea.

For our country, UNCLOS has been the compass, the “Holy Gospel” of our foreign policy. More than 165 countries have already ratified it. And even countries that haven’t, like the United States, are calling for its full and unconditional implementation.
UNCLOS is part of customary law. In accordance with the rules of the Convention, our country has taken a number of important and beneficial measures at the national level in recent years.
And I am proud to have participated in these actions: in the maritime delimitation agreement with Italy in June 2020, in the partial delimitation agreement of the EEZ with Egypt in August 2020.

Greece has repeatedly declared its intention and willingness to negotiate similar agreements with other neighboring countries on the basis of international law. To this end, we have agreed with Albania to refer the delimitation of the maritime zones of the two States to the International Court of Justice in The Hague, in full respect of the provisions of UNCLOS.

Furthermore, in this way, our country has exercised its right to extend its territorial waters to 12 nautical miles in the area of ​​the Ionian Sea. And it reserves the right to exercise it in other parts of its territory. Unfortunately, Turkey is the only country in the region that stubbornly refuses to accept the evidence and implement UNCLOS.

Turkey’s violation of the rules of the international law of the sea constitutes a source of tension and instability: The threat of resorting to force if Greece exercises its right to extend its territorial waters to 12 nautical miles; the promotion of the “blue homeland” theory; and the illegal Turkish-Libyan memorandum, are elements of Turkey’s illegal behavior.
All of these constitute flagrant violations of international law that seriously undermine any attempt to peacefully resolve the only dispute we have with our neighboring country.
Our country constantly supports and promotes positions and solutions in line with the Convention, which after all is part of the European acquis.

After 40 years, UNCLOS is more relevant and effective than ever in addressing global challenges. And the need to ensure its integrity is more urgent than ever. This is why Greece will continue to defend its interests and rights, always in accordance with UNCLOS.

I would add that Greece, through its active role in the group of friends of UNCLOS, is taking initiatives to underline the importance of UNCLOS for stability and peace.
In this regard, the “Our Ocean Conference 2024” to be hosted by Greece aims, among other things, to highlight the aspect of environmental protection within the framework of the provisions of UNCLOS. [AMNA]

Airbus wins satcoms contract for the Czech Republic and the Netherlands

Gold in Golden Carriage comes from Suriname, according to research ahead of Dutch Prime Minister’s visit