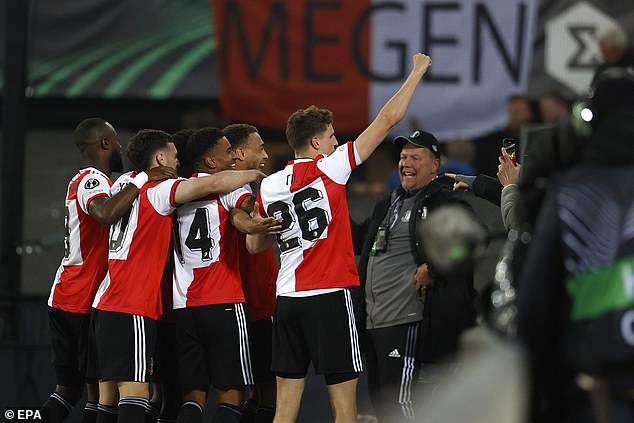 FEYENOORD 3-2 MARSEILLE: The Dutch win the thrilling first leg of the Europa Conference League semi-final after the Ligue 1 fightback in Rotterdam

By Liam Morgan For Mailonline and Reuters

Feyenoord cruised to a narrow 3-2 win over Marseille in a thrilling first leg of their Europa Conference League semi-final in Rotterdam.

Four of the five goals came in a breathtaking first half at De Kuip before Cyriel Dessers netted his second of the game to secure his side a slight lead in France for next week’s second leg.

Marseille will no doubt be happy with the result after Duch’s side threatened to run away with him in the first half.

Feyenoord scored twice in as many minutes early in the first half to take the lead in the draw.

Dessers and Luis Sinisterra provided the reward for a positive start in which the hosts mounted wave after wave of attacks.

But Marseille pulled one back with a thunderous strike from 25 yards out from Bamba Dieng which flew over Ofir Marciano at his near post in the 28th minute.

They were level before the break as the keeper could only parry Matteo Guendouzi’s cross and Gerson fired into the net from 10 yards in the 40th minute.

Dessers put Feyenoord back in front just after the break as Duje Caleta-Car dropped his back pass to keeper Steve Mandanda and the Nigerian international stole to score.

The winner will meet either Leicester or Roma in the final, with their level at 1-1 after the first leg at the King Power Stadium.