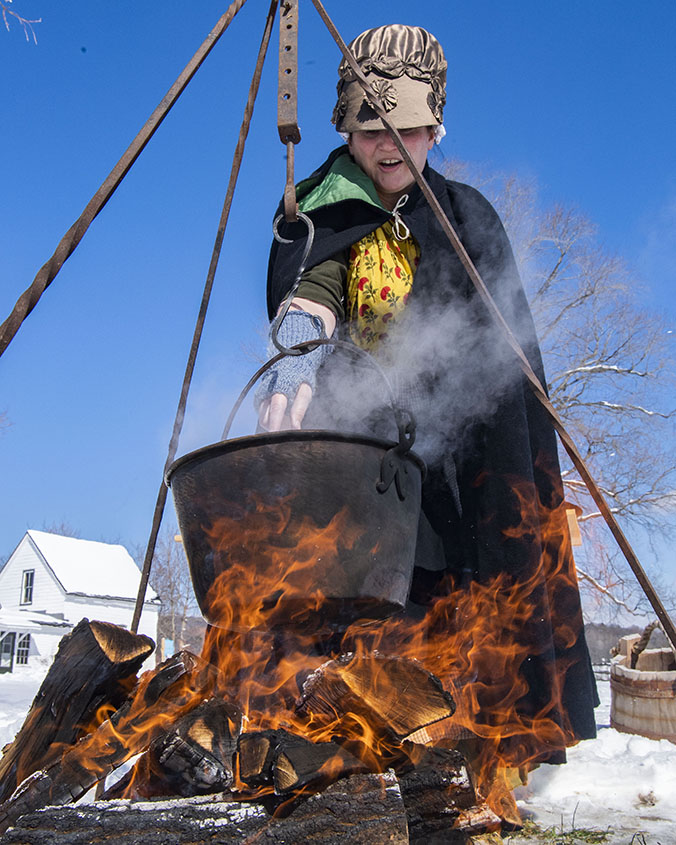 ROTTERDAM JUNCTION – Six-year-old Jack Burnham approached the Boxelder maple, put his finger on the maple sap tap and waited for a drop to hit his finger, then licked it off.

Moments earlier, John Ackner, facilities manager at the historic Mabee Farm site, tapped the tree before showing the group of a dozen people another tree that had already been tapped and was dripping with maple in small buckets.

Ackner was one of three people on Saturday afternoon teaching people the process of tapping maple syrup and the process of making maple sugar seen in centuries past as part of Maple Leaf Day. Mabee Maple.

Ackner took a screwdriver, twisting it until it cut a hole in the surface of the boxwood maple. He then took a hammer and a sumac tip, banging it into the tree and watching the maple begin to sink.

“She said she wanted to go home after that and do it,” Maggie Burnham said of her 9-year-old sister, Lilly Burnham, who watched everything intently.

The Burnham children’s father, Nathan, grew up in Maine where he learned to tap trees, so when his wife Alice Friend said the event was happening, they decided to check it out.

She spoke of promoting maple production as part of the anti-slavery movement because the process did not require slaves.

Ben Ranish from Washington DC, along with his cousin Nora Marfisi-Schottman from France were visiting their grandmother Ruth Schottman who lives in Burnt Hills and decided Maple Day would be interesting to visit.

Ranish also tasted the Boxelder’s maple after it was notched.

Marfisi-Schottman said she was surprised to learn the amount of maple sap needed to make syrup, which she has never seen in France.

Ackner said it takes about 40 gallons of sap to make a gallon of syrup.

“It’s kind of the modern way of doing things,” he said.

Ackner said the season has been good, noting that the syrup they make from the trees is donated to people who volunteer at the site or to be used for fundraising events. The trees around here are usually tapped in mid-February and go until they start to bud, Ackner said.

Because it was colder on Saturday, Ackner said he could empty the buckets one by one.

“On a very hot day up to 50 degrees I would empty them twice,” he said.

He said they had about 80 gallons so far.