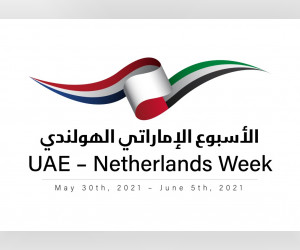 ABU DHABI, June 5, 2021 (WAM) – The United Arab Emirates and the Kingdom of the Netherlands concluded the activities of the UAE-Netherlands inaugural week, held from May 30 to June 5, 2021, in a series of events who have promoted culture and knowledge exchange between the two countries.

The week took place against the backdrop of the two countries’ celebration of nearly fifty years since the establishment of diplomatic relations, as well as the fiftieth anniversary of the United Arab Emirates since its founding as a nation.

Representatives of Emirati and Dutch government entities, cultural institutions and youth organizations took part in the forum. Participants included Omar Saif Ghobash, Deputy Minister for Public and Cultural Diplomacy at the UAE Ministry of Foreign Affairs and International Cooperation; Hissa Abdulla Al Otaiba, Ambassador of the United Arab Emirates to the Kingdom of the Netherlands; Lody Embrechts, Ambassador of the Netherlands to the United Arab Emirates; Ahmed Aboutaleb, Mayor of Rotterdam, and Hans Sandee, Netherlands Commissioner General for Expo 2020 Dubai, among others.

Speaking at the event, Ghobash said: â€œThe UAE-Dutch relationship, which has produced significant economic benefits for our countries, has also brought our people together to share our rich cultures. The United Arab Emirates and the Netherlands firmly believe that by strengthening cultural collaboration, our countries can benefit from each other’s experience and diversity of offerings. “

Participants also discussed Dutch participation in Expo 2020 Dubai, where the Netherlands will host a pavilion highlighting the link between water, food and energy security.

â€œExpo 2020 Dubai will also serve as a forum through which the United Arab Emirates and the Netherlands can strengthen one of the pillars of our lasting relationship: that of food security. In the United Arab Emirates, we are excited to see what our Dutch partners will be presenting under their Microclimate Thematic Pavilion, which will focus on water, energy and food resources. Our two countries have worked together to achieve food security in a sustainable manner, and Expo 2020 Dubai offers opportunities for Dutch agro-tech companies to expand their engagement in the United Arab Emirates, as well as other target markets â€ , added Ghobash.

For his part, Lody Embrechts, Ambassador of the Netherlands to the United Arab Emirates, said: â€œThe topics we covered this week – from design to women’s empowerment, from entrepreneurship to food security – are of great importance. ‘of great importance to our two countries. The â€œUAE-Netherlands Weekâ€ has hopefully created a platform to discuss opportunities, exchange ideas, reflect on the future and increase collaboration. We both have open and diverse companies focused on innovation and I look forward to addressing the various issues discussed together with the UAE. “

The sessions covered a variety of topics, including ways to enhance cooperation in arts and culture sectors, promote food security and energy efficiency, empower women in STEM fields, and foster empowerment. entrepreneurship and scientific innovation.