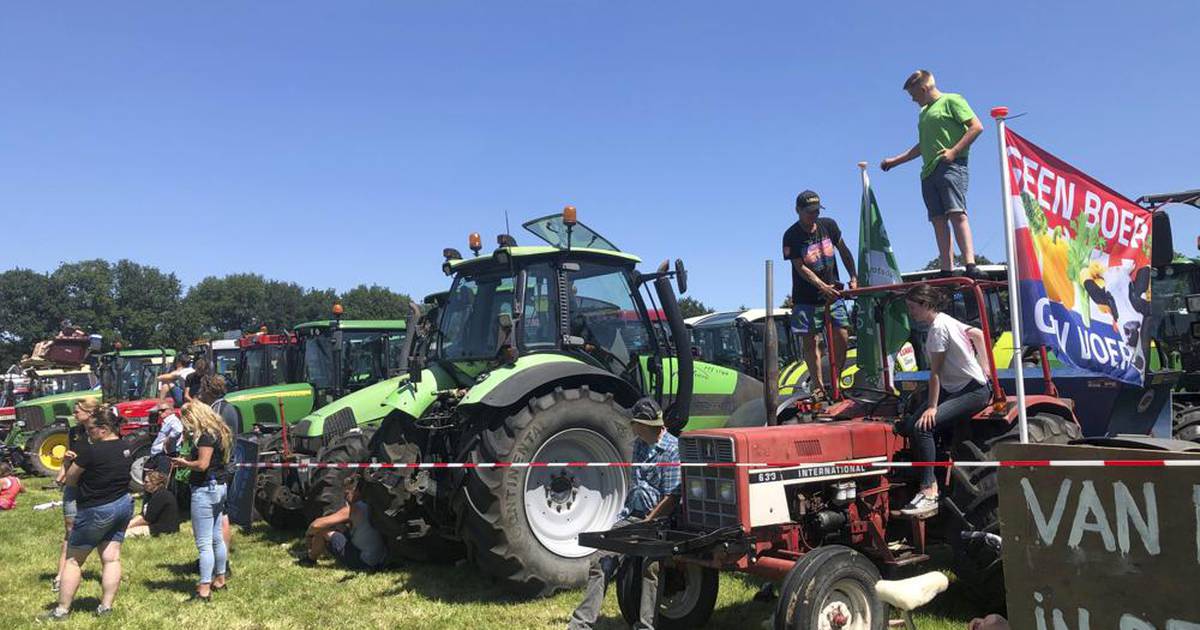 STROE, Netherlands (AP) — Thousands of farmers gathered in central Holland on June 22 to protest Dutch government plans to limit emissions of nitrogen oxide and ammonia, to drive their tractors through the Netherlands and rumble through traffic on major highways.

The protest was staged after the government published national emissions reduction targets, sparking anger among farmers who claim their livelihoods – and those of thousands of people who work in the agricultural service sector – are at stake .

Calling it an “inevitable transition”, the government has imposed emission reductions of up to 70% in many places near protected natural areas and up to 95% in other places.

The government was forced to act after courts in recent years began blocking permits for infrastructure and housing projects because the country failed to meet its emissions targets.

By early afternoon, many had arrived in a green field in the small farming village of Stroe, about 45 miles east of the capital, Amsterdam, where a stage was set up for speakers to address the crowd and music blares from the speakers as the kids bounce around. in a giant inflatable pig.

Farmers honked their tractors as they drove through the field, where a banner on a truck read, in Dutch, “What The Hague chooses is deeply sad for the farmer”, a reference to lawmakers in the city which is home to the Parliament of the Netherlands. Another banner on a tractor read: “We can no longer be stopped.

The national infrastructure authority urged motorists to delay their journeys as slow-moving convoys of tractors defied calls not to use the motorways as they headed towards the protest.

In The Hague, a few dozen farmers and their supporters, some wearing T-shirts with the text “No farmers, no food”, gathered for breakfast before heading to the protest.

“That’s where the rules are made,” said dairy farmer Jaap Zegwaard, who parked his tractor at the edge of a city park. “I was asked to come here and provide breakfast so we can show that we are producers of food, not producers of pollution.”

The ruling coalition has earmarked an additional $25.6 billion to fund changes that will likely force many farmers to drastically reduce their livestock numbers or get rid of them altogether.

The plans, which are to be carried out by provincial governments, have been opposed even by members of Prime Minister Mark Rutte’s own party and others in his coalition. Provincial governments have had one year to formulate plans to meet reduction targets.

A government lawmaker, Tjeerd de Groot, tweeted that he had planned to attend to discuss the plan with farmers, but canceled his trip on the advice of a government security agency.

“Does the tractor law apply in our country? he tweeted.

Agriculture is a key sector of the Dutch economy, with exports worth nearly $111 billion last year. But this comes at the cost of producing polluting gases, despite measures taken by farmers to reduce emissions.

Zegwaard said farmers were ready to talk about how to reduce emissions, but objected to industry taking most of the blame.

“Now the agricultural sector is being dismissed as a major polluter and that’s not fair,” he said.