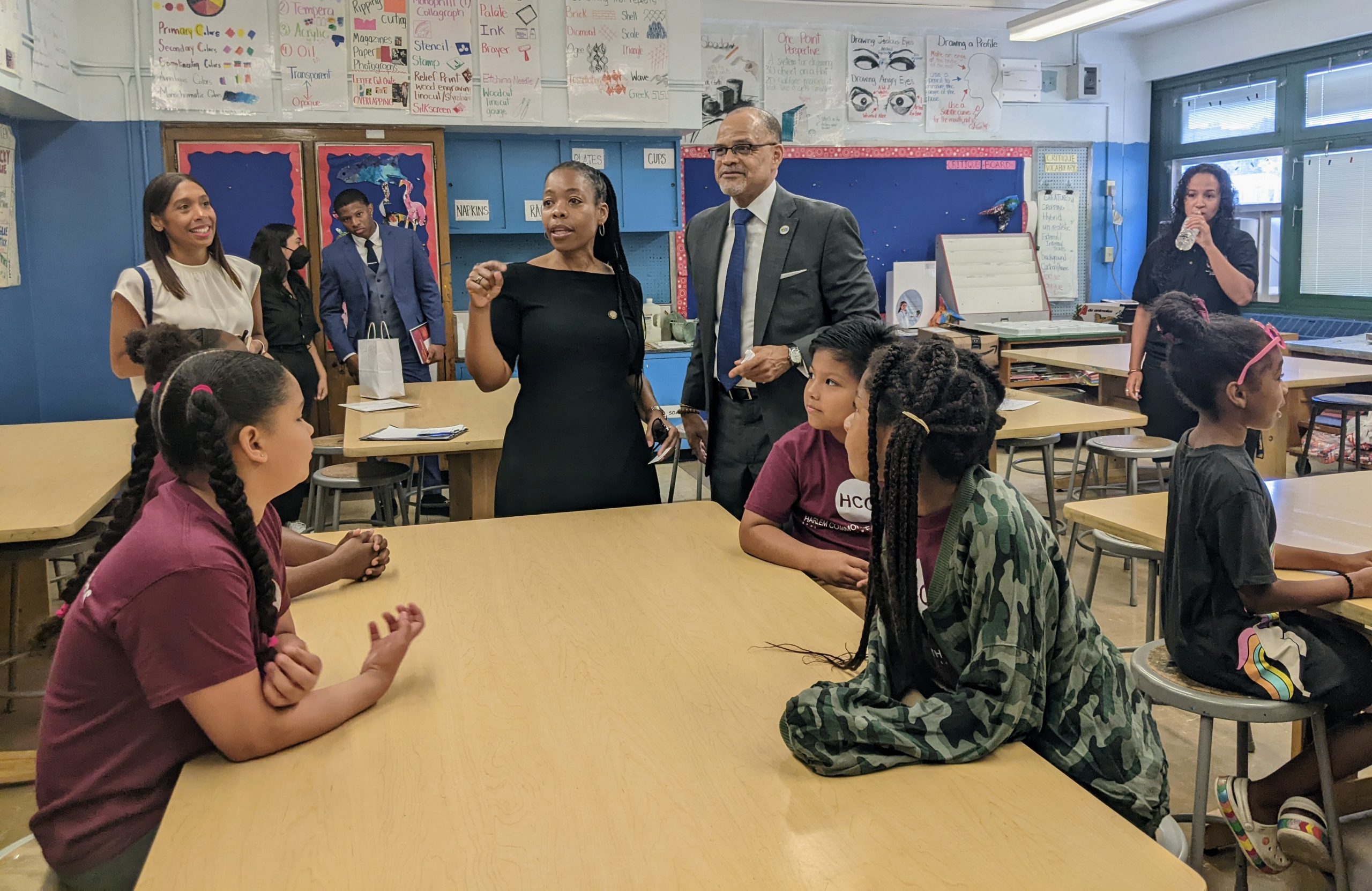 The Summer Rising initiative is a partnership between the Department of Education (DOE), New York City Public Schools, the Division of Youth and Community Development, and hundreds of community organizations that educate approximately 110,000 young people this summer. Adams had worked to expand the Summer Rising program this year, following its launch under former Mayor Bill de Blasio in 2021.

Jasmine Caceres, Principal of PS 161, and other officials joined the tour. Banks, oddly enough, lives about three blocks from the school and often drives around it, he said.

“It’s a wonderful community to live in Harlem, the village of Harlem, especially for people of color and black people, has had tremendous cultural significance,” said Banks, who grew up in Brooklyn. “So I’m happy to be here every day.”

Banks sat with students from various grades as they participated in hands-on learning activities in arts and biology. He visited the summer school’s English and creative writing class and spoke with the children about each topic. Most of the younger students were happy to have company or very shy. Other students from the older grades proudly showed off their work and skills to banks and visitors.

“I think Summer Rising is an extremely important program for our New York students,” Banks said after the tour. “They’re learning, they’re having fun, so they’re not just at home watching TV and having downtime. So I’m really excited about that. It was a wonderful visit. The children are taken care of and this is our first job.

The school has set up a fun “CBO Carnival Space” to host daily handmade games and activities for students, as well as to provide freshly prepared snacks.

Council member Rita Joseph, who chairs the education committee, attended the tour with Banks. She said they often do these kinds of visits to check on Summer Rising programs and see if there are any issues that need to be addressed. She said they were immediately calling the DOE for fixes. “Whether it’s transportation, not enough paras, student mandates,” Joseph said.

The upcoming school year will be Banks’ first full year as chancellor. He said he was “looking forward to it” with hope and optimism.

Although the Summer Rising program is advertised to keep kids engaged year-round, it’s technically not funded in this year’s budget and is a federal stimulus initiative.

“It’s not a baseline,” Banks said, “but we’re going to work with the city council and do whatever we can to try to figure out how we get the funding from the state, from the federal government that will really continue , really important work. Right now we’ve had the great benefit of stimulus funding. At some point, that’s going to run out.

Banks did not address the current litigation that a parent-teacher group has filed against it and the DOE over cuts to next year’s school budgets during the walkthrough.

Last week, a judge rejected the city’s attempt to have the lawsuit dismissed. The judge ruled in favor of parents and teachers.

“We will take all possible steps to ensure that this litigation does not disrupt students and families and that our schools open smoothly in September,” the DOE said in a statement following the layoff. “This includes ensuring that the DOE school budgeting system remains fully available. As such, the Galaxy application will be available [Saturday] morning to ensure critical school operations are carried out as directed by the court.

The public hearing in the budget cuts trial will resume on Thursday, August 4.
Ariama C. Long is a member of the Report for America corps and writes about New York culture and politics for The Amsterdam News. Your donation to match our RFA grant helps him keep writing stories like this; please consider making a tax deductible donation of any amount today visiting : https://tinyurl.com/fcszwj8w

Dutch government and farmers in talks over emission reduction targets