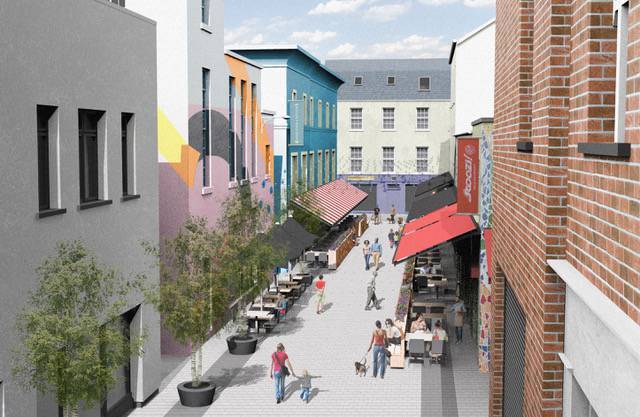 Architects were hired to design streetscapes, providing a unique identity for each street and an enhanced downtown experience. They worked closely with Cork City Council and the traders on each street to develop their designs.

“A vote of confidence”

The news has been described as “a vote of confidence” in downtown businesses.

“I can actually see us being the next Amsterdam,” said a bar manager in Cork.

“People have enjoyed the outdoor seating a lot already and it has taken off far more than our vision could have been,” said Mr. Dwyer.

“It put us back on the map, it’s really good for business, and we’re all after bonding and all looking out for each other and that’s after bringing people so close.”

He said he “can’t wait” for plans to be finalized and put in place and for alfresco dining “to be the way forward for the city over the next few years.”

“I can actually see us being the next Amsterdam, it’s going that way,” Dwyer said.

The owner of the Idaho Café on Caroline St, Richard Jacob, said the funding was “a vote of confidence” in Cork City.

He said the long-term commitment to improving the city’s streets “makes Cork more [of] a year-round destination for domestic tourism and receptive tourism ”.

He said Caroline St’s development will see it seat around 40 people outside, compared to 12 people the cafe could sit outside before the pandemic, with 30 more inside.

Mr Jacob said it wouldn’t just be the restaurants on the street that would benefit, as the plan is to have a 4m wide walkway in the middle for those who can walk around town or are in town. to do shopping.

“It makes a beautiful boulevard from the street and it’s a huge improvement,” Mr. Jacob said.

He said the development will bring the street to life “instead of just an empty loading dock” and he looks forward to what will be “a very exciting time for the city”.

“New life” in the city

Cork Business Association president Eoin O’Sullivan said the funding came at the right time and the program is the answer to the big worry of moving into the colder months after a successful summer of alfresco dining .

“Now that we will have a lot more weather-protected streets just in time for Christmas, that’s another boost for downtown,” said O’Sullivan.