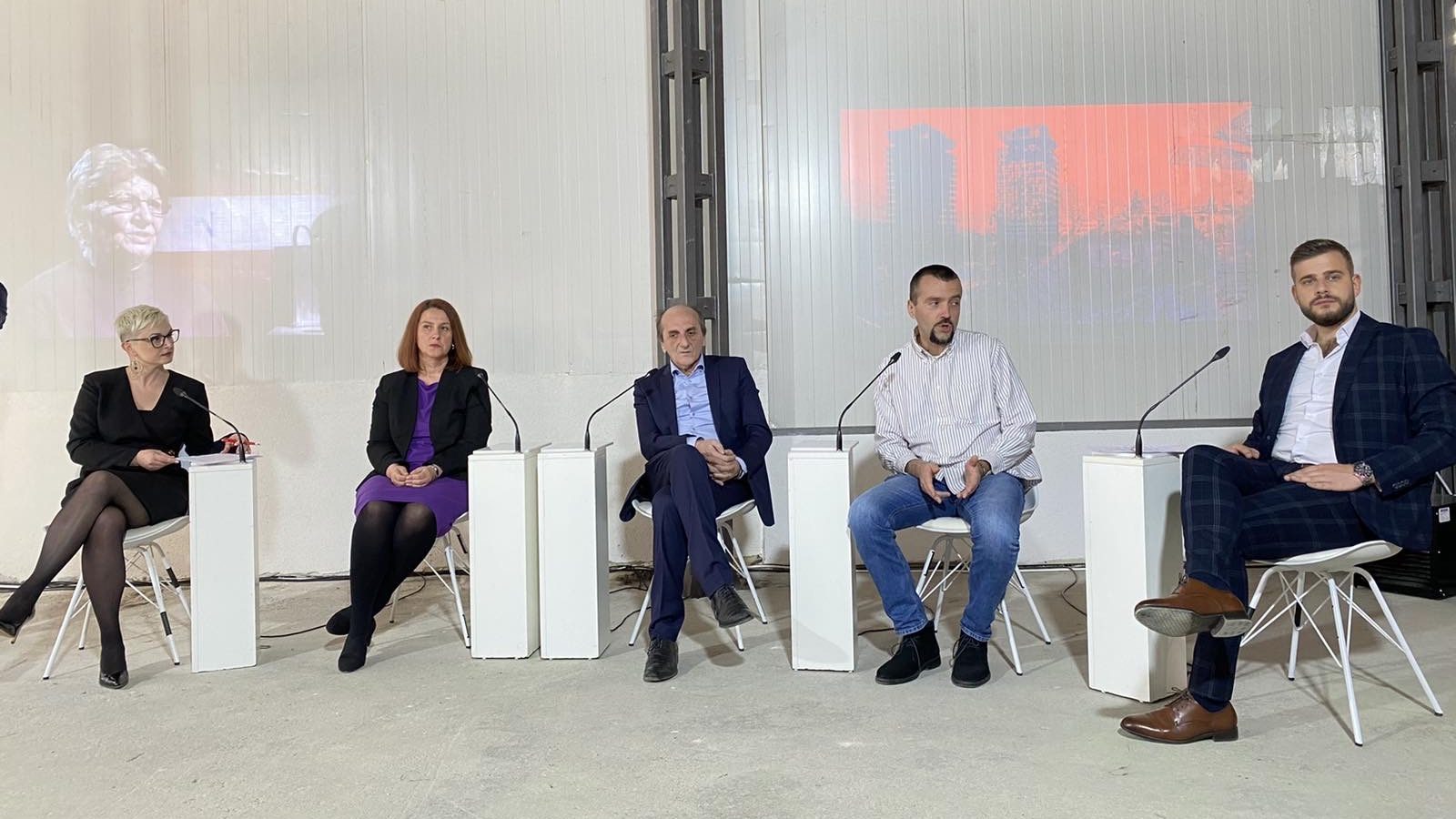 (LR)Anisa Suceska, ICTY, Melisa Foric and Zijad Sehic, history teachers, Haris Rovcanin BIRN journalist and author of the database, and Nikola Vucic, L1 journalist and moderator take part in the pdiscussion anel “Facts established for the courts without a place in the curricula”. Photo: BIRN/Emina Dizdarevic.

BIRN presented a round table on the theme “No place for adjudicated facts in school curricula”, presenting part of its database facts related to the siege of Sarajevo from 1992 to 1995 which were established in or by verdicts of the International Criminal Tribunal for the former Yugoslavia, ICTY.

Besides besieged Sarajevo, other parts of the city that were under the control of the Bosnian Serb army, the VRS, including Grbavica, Vraca and Nedzarici, as well as the municipalities of Sarajevo Ilidza, Hadzici, Vogosca and Ilijas, also covered, including locations where civilians were detained and killed, demolitions and looting of property, and other crimes committed in the Pale and Sokolac areas.

BIRN journalist Haris Rovcanin, who is working on the creation of the database, said Sarajevo and its surroundings were the first regions to be featured, symbolically, because this siege began 30 years ago, in April 1992. The term ‘siege’, he explained, is used in court verdicts and the fact that Sarajevo was besieged during the war is one of the facts judged.

“We have created a database containing some of the basic findings of the courts regarding deliberate sniping and bombing campaigns and indiscriminate and direct attacks on the civilian population, as well as the fact that no part of the city is was safe from shelling from positions held by the Sarajevo-Romanija Corps of the Bosnian Serb army, as determined in the verdicts, and that civilians were targeted while fetching water , walked around the city and used public transport, especially trams,” Rovcanin said.

BIRN local director Denis Dzidic said the development of the multimedia database of court-established facts was of extreme importance to learn more about the past and as a tool to counter revisionist narratives and denial. genocide and war crimes in Bosnia and Herzegovina.

“We are witnessing the politicization of history in Bosnia, which has been particularly pronounced in the public appearances of politicians in the pre-election period, but also in school curricula,” he said.

“Through the development of this database, we are working to counter narratives that focus on division and denial, and to develop a single media platform that can serve teachers, students, and anyone who cares. interest in the facts judged,” said Dzidic.

The incidents of sniping and shelling, as they are called in the verdicts, in which it was determined with certainty that fire was opened from positions held by the Sarajevo-Romanija Corps, have been isolated and dealt with for the purposes from the database. The same was true of the bombardments with the use of modified aerial bombs in 1995, which, as established by the chambers of the court in The Hague, were not suitable for hitting concrete targets.

According to Rovcanin, one of the objectives of this database is to collect in one place all the crimes established by the verdicts of the court in The Hague, but without naming the concrete perpetrators. Indeed, in some cases, trial chambers determined that crimes had been committed in a certain location, but lacked evidence to link and convict the person tried for those specific crimes.

Furthermore, the objective of the database is to help future researchers, students and journalists to find the basic information they need for their future work, but also to help teachers and ministries of education by providing materials for school curricula and teaching methodologies on the past war. .

Historian Melisa Foric, who worked on the educational tool for this database as an external BIRN contractor, said the fact database will provide an option for quick research, verification and use of facts. facts and historical sources, which form an integral part of the verdicts. delivered by the ICTY.

“The model classes, which will be an integral part of the database, offer the possibility of analyzing the events that took place on the territory of Bosnia and Herzegovina between 1992 and 1995 on the basis of parts of testimonies of victims described in the verdicts of the ICTY, and encourage students to present their personal conclusions vis-à-vis the content of the verdicts,” he said.

“In particular, attention is drawn to the importance of personal testimonies made in the form of short videos to which school-aged children are much more receptive in the process of understanding and learning,” Foric added.

According to her, thanks to a multi-perspective approach and original materials, the database should facilitate an easier determination of the chronology of the war, allowing a clearer perception of a causal link between certain events and the responsibility of the individuals for these events, as established by the verdicts of the ICTY.

A senior human rights adviser at the Office of the United Nations Resident Coordinator in Bosnia and Herzegovina, Agnes Picod, said it was very important for memory in Bosnia but also outside its borders, adding that education was the backbone of reconciliation.

She said that the principle of impartiality had been very important in the work of the ICTY.

According to her, the decisions made by the ICTY and the International Court of Justice are based on evidence and testimony, while the convictions concern individuals.

“Verdicts establish individual and not collective criminal responsibility. They serve to convict individuals. The verdicts of the ICTY contribute to the process of establishing the truth and play an essential role… [though] 26 years after the end of the war, some individuals continue to deny, minimize and deny the facts judged,” Picod said.

Picod also said that education should be one of the pillars and pathways through which reconciliation spreads. According to her, school curricula and textbooks lack impartiality, especially with regard to conflicts.

“When they mention criminal offences, they don’t mention them as crimes against humanity or genocide. Schools and education systems should not be exposed to political agendas,” Picod said.

Although the ICTY archives are already available, the adjudicated facts platform offers an abridged and clear overview of the findings of ICTY verdicts to the general public and teachers, as well as creators of educational content related to topics on the 1992-95 war, enriched with original content that can be used in teaching, Foric said in conclusion.

Anisa Suceska, from the Mechanism for International Criminal Tribunals, and history professor Zijad Sehic also spoke at the roundtable.

At the end of the project, besides Sarajevo, the database will also contain facts about ten other regions, namely Eastern Herzegovina, Zenica region, Central Bosnia, Doboj-Posavina region and Eastern Bosnia, Srebrenica , the region of Herzegovina, Krajina and Bijeljina-Zvornik. Region.

The database is implemented with the support of the United Nations Democracy Fund, UNDEF.