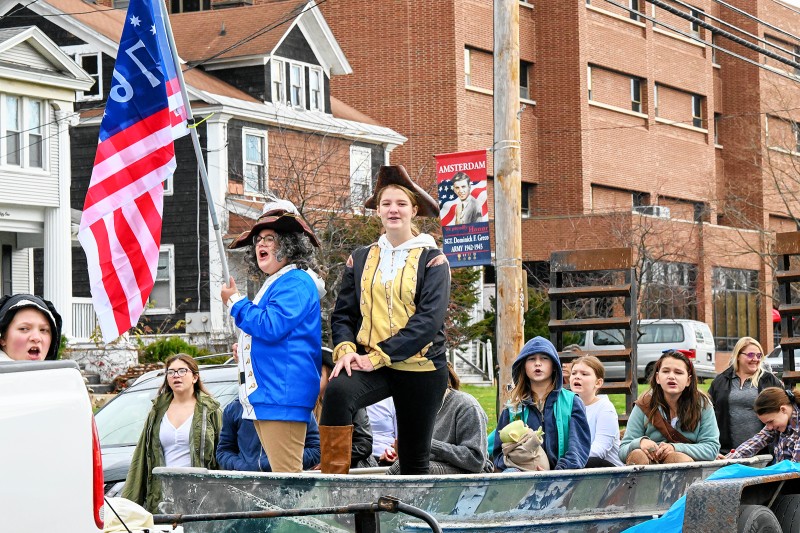 AMSTERDAM — After learning about World War II at school, Gabe Gennett was filled with pride after learning that his great-grandfather, Ted Pawlik, had served in the United States Navy at a pivotal time in world history.

“It’s cool that there was someone in my family who represented the country,” Gabe, a seventh-grader at Lynch Middle School, said Friday.

Gabe shared the story of his great-grandfather’s decorated service on the destroyer USS David W. Taylor at Amsterdam’s annual Veterans Day service at West End Memorial Park after the parade on Guy Park Avenue. Both were organized by the American Legion Post 701 with support from the Amsterdam Department of Tourism, Recreation and Marketing.

“It feels good to talk about it,” Gabe said. “And don’t forget that.”

Passing on stories of Pawlik and his service to the younger generation of the family was important to Gabe’s mother, Marisha Gennett.

“We talked about the kind of person he was and the stories I remember from my childhood. He was a great personality,” Marisha said of Pawlik, her grandfather. know how important it was to me as a kid and how it always will be.”

Pawlik served in the Navy from October 1942 until his honorable discharge in December 1945. After leaving the armed forces, Pawlik then took on public service duty as a former supervisor in Amsterdam and through his involvement in various local organizations.

Although he passed away in 1988, Pawlik’s story lives on and Gabe is fondly remembered.

“I never had the chance to meet my great-grandfather, but I’m still very proud of everything he did and to be his great-grandson,” Gabe said.

Amsterdam Mayor Michael Cinquanti also recounted the pride he felt leading the Veterans Day parade three years ago, joined by his then 99-year-old father-in-law Louis Rossi. The veteran Marine had flown 49 bombing missions in the Pacific during World War II.

“My father-in-law had beaten all odds, he returned to Amsterdam after surviving one of the most dangerous combat missions,” Cinquanti said.

While Rossi was one of the few to return home unscathed, Cinquanti said his father-in-law encountered situations during his missions where he thought he was close to losing his life.

“But when I asked him 60 years later after flying his last mission if he had to do it all over again, would he fly in that bomber? His response was immediate and definitive: “I’d do it all in a minute,” Cinquanti said.

This spirit of sacrifice is undoubtedly shared by veterans and should be honored, Cinquanti said.

“That’s why we’re here today,” Cinquanti said. “The men and women who wear an American Army uniform do so because they love this country.

“And they were willing to devote much of the bounty of their lives to serving it, protecting it and, if necessary, fighting for it and dying for it, so that the rest of us could enjoy the freedoms and privileges that have defined this great country.

Of the many events held in the city, Montgomery County District Attorney Lorraine Diamond admitted the Veterans Day parade and service were “nearest and dearest” to her heart.

“There are so many precious veterans we should honor on a day like today. I thank all veterans for their service to this great country,” said Diamond, a U.S. Marine Corps veteran and American Legion Post 701 judge advocate.

The parade and service were fitting tributes to the commitment and sacrifice of the nation’s service members past and present that should always be remembered and celebrated, said State Assemblyman Angelo Santabarbara, D-Rotterdam.

“Today we pledge never to forget them,” Santabarbara said. “We cannot say this enough, for their service in war and in peace, thank you to our veterans.”