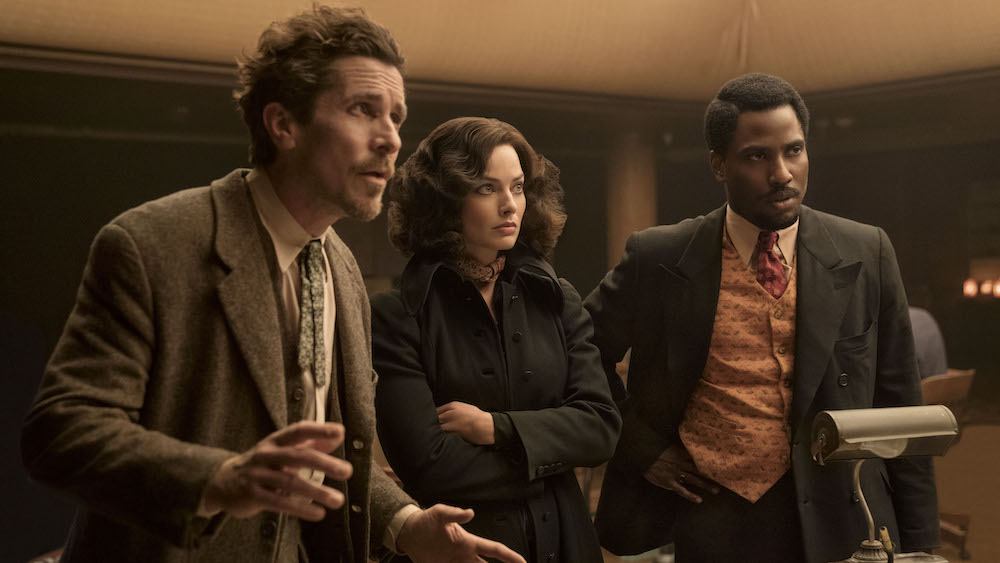 “A lot of that really happened,” teases the opening card of David O. Russell’s unruly ensemble comedy “Amsterdam,” a goofy social satire from the early ’30s that cartwheels through a little-remembered episode in American history when fascists attempted to overthrow the US government. Russell clearly sees parallels between this alarming chapter in the nation’s past and our present, as national divisions threaten to overwhelm American democracy, but the writer-director complicated the plot – the plot of the film is i.e. not the biggest conspiracy it spins on – so much so that audiences are bound to be baffled. Instead of wondering which parts are real and which were made up, they’ll likely find themselves wondering, “What the hell is going on?” for the bulk of 134 minutes.

Some confusion is neither unusual nor unwelcome in comic capers and thrillers, where the fun so often derives from being pounced on by surprising developments (what happens to Taylor Swift in this movie is called such a twist). Back in freewheeling “American Hustle” mode, Russell has an appetite for mayhem that can be particularly exhausting, and while this quirky set offers some clever ideas and an assortment of counter-type performances from A-list names, “Amsterdam” amounts to less than the sum of its parts.

The film centers on a friendship between three Americans embroiled in an elaborate political intrigue. The trio were never happier than when they lived together in Amsterdam after the Great War. Encouraged to enlist (and possibly die) by his high-society in-laws, Dr. Burt Berendsen (Christian Bale) lost an eye and half his face in a dispute, but won an amigo for life in Harold Woodman (John David Washington), a black soldier who — and this is one of the details of the film “it really happened” — was forced to fight in French uniform since American troops refused to integrate.

Both Burt and Harold were seriously injured in a dispute, but were lucky enough to meet a spirited nurse named Valerie Voze (Margot Robbie) during their recovery. Bale sinks deep into the latter character, taking on the disheveled look and distracted manner of a young Peter Falk (down to Burt’s wonky glass eye, which never quite aligns with the working one). ), while Washington looks oddly shallow by comparison, his face staring into that same blank expression that is quickly becoming his signature. Robbie dazzles right away with her defiance, speaking French (enough to confuse us as to her character’s origins) as she ushers the boys out of the field hospital – the Jeanne Moreau to their Jules and Jim.

Valerie collects shrapnel from her patients, but instead of throwing away those fragments, she saves the twisted metal for art projects: teapots made from bomb parts and surreal photo collages of the kind that Man Ray and Grete Stern made in the 1930s. Burt is also a bit of a sculptor – of the medical arts – reconstructing the faces of other disfigured veterans (while testing experimental painkillers on himself). For a brief and glorious time in Amsterdam, the friends are spared the stress of their lives – and their wife (Andrea Riseborough), in Burt’s case – back in America, their shenanigans somehow enabled or guaranteed by two spies birdwatchers (Michael Shannon and Mike Myers, the latter heavily disguised and accented), who promise, “We’ll call you back sometime in the future.”

Alas, the trio’s carefree days dancing the Charleston among the Dutch are numbered – and just as well, since this cute segment of the story feels too indebted to Wes Anderson, and not in a good way (e.g. inventing a absurd song around the French word that makes everyone laugh: “grapefruit”). The bulk of the film is set 15 years later, in New York (New Amsterdam?) in late 1933, as Burt and Harold agree to investigate the suspicious death of the senior officer who introduced them, to be charged with murder in the process. Although the case doesn’t appear to be of terrible urgency to the police (as detectives, stars Matthias Schoenaerts and Alessandro Nivola deliver broad character acting performances), the couple are determined to clear their names, which brings them back into contact with Valerie.

Russell cooks up a lot of high-end kookiness (i.e. comedic situations taking place in the halls and living rooms of polite society houses, like something out of a classic Howard Hawks or Ernst Lubitsch, as opposed to flat-out farce), but through it all, the connections between these three characters are meant to be what keeps us invested. Russell miscalculated something there, however, since the friends’ 15-year estrangement is resolved before they even have time to miss each other in the film, and whatever chemistry there was between the characters in Harold and Valerie, she never quite shows up on screen.

The murder case never seems very urgent, but we are alarmed to discover that since her return, Valerie has been kept drugged and locked inside, under the guise of a “hereditary nervous disorder”, by her brother Tom ( Rami Malek) and his wife, Libby (Anya Taylor-Joy). These two have troubling political beliefs that are best left uncovered in the film, though it’s worth pointing out that the New York veterans’ reunion where it all culminates was inspired by a real-life event. The evening’s guest speaker, played by Robert De Niro, was inspired by the real war hero, Major General Smedley Butler, who uncovered a plot dubbed the Business Plot.

Russell is right to remind Americans of this shameful moment in their past (skip this paragraph to avoid spoilers), as history books tend to downplay the support in the United States that Mussolini and Hitler enjoyed before WWII. . In his novel “The Plot Against America” ​​(adapted for HBO around the same time “Amsterdam” was filming), Philip Roth imagines an alternate history in which Franklin D. Roosevelt was defeated by Nazi sympathizer Charles Lindbergh. Here, Russell shines a light on more dastardly plans to remove the president from office. Production designer Judy Becker (who does a terrific job of the film’s myriad vintage locations) drew inspiration from 1930s gatherings, like the one Marshall Curry documented in her short documentary “A Night at the Garden “, nominated for the Oscars, to the portrait of George Washington. hanging behind the stage.

Russell’s political message of speaking the truth and thinking for himself is ultimately what makes “Amsterdam” appealing, though the film is marketed largely on the popular appeal of its cast. It’s a dicey prospect for such an expensive image, given that almost none of the stars are delivering what fans love most about their personality – with the possible exception of Chris Rock, who can inquire about supremacy. white. It’s shot beautifully by cinematographer Emmanuel Lubezki, whose swooning blend of Steadicam and handheld techniques has given an almost divine grandeur to recent films by Terrence Malick and Alejandro G. Iñárritu, though that fluid style combines quite eerily with Russell’s more erratic comedic sensibilities.

The result has all the red flags of a flop, but takes an anti-establishment stance strong enough — and does so with wit and originality — to earn a cult following. There’s too much ambition here to discount the film, even if “Amsterdam,” like the history it depicts, ends up taking years to rediscover and understand.

Rotterdam leaders want a new bridge over the Meuse