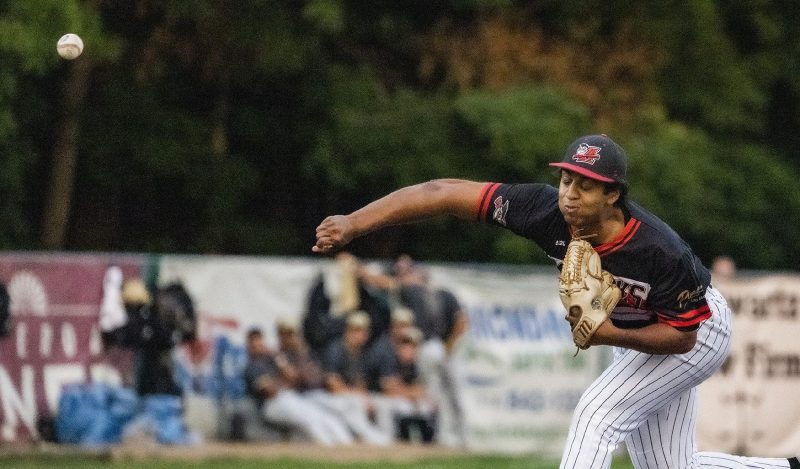 AMSTERDAM — Amsterdam manager Keith Griffin said he knows Saugerties have improved, so he expects a battle on Monday.

But the team that won more Perfect Game Collegiate Baseball League titles than anyone else wasn’t going to be denied. Rallying from an early 2-0 deficit, the Mohawks outscored the Stallions 5-3 in the East Division Championship in front of a standing room crowd at Shuttleworth Park.

Amsterdam will contest their sixth league title starting Tuesday in a best-of-3 series against West Division champions Batavia, who beat Utica on Monday. Game 1 will take place in Amsterdam, followed by two, if necessary, in Batavia on Wednesday and Thursday.

“We were very unusual defensively,” Griffin said. “We made three errors and we had balls that we didn’t block behind the plate. We just fought and fought and fought, and every pitcher we brought in was capable of throwing punches and throwing pitches when we needed them. It’s been that team all year.

Saugerties took a 2-0 lead early in the first. Evan Goforth hit an error in the field, moved up to second on a wild throw and third on a fielder’s pick. Garrison Berkley then hit a double on the first baseman, but still too short for the right fielder.

Garrett Michel followed with a single to move Berkley to third. Amsterdam starting pitcher Colin Brougham then got a third strike on Stallions’ JP Tighe, but the ball squirted through receiver Mark Black’s legs, allowing Berkley to score.

Amsterdam recovered one in second. Zack Gardiner started with a single to center field and eventually came home on defenseman pick Ian Petrutz.

The Mohawks scored another run by making noise two outs to tie in the third. Cameron Love, Brett Coker and Gardiner have all been single, with Gardiner earning the RBI.

Saugerties regained the lead in fourth. Tighe was hit by a pitch to start. A Colin Mackle single took him up to second, and number nine hitter Jahlani Rogers singled into left field to tag Tighe, who just beat the tag.

Brougham was relieved by Santhosh Gottam, who got the last two outs with the bases loaded to avoid further trouble.

The Mohawks took the lead in the sixth. They went 3-3 on defenseman pick Cade Bush who scored Briggs Rutter. Then number nine hitter Nick Giamarusti delivered the big hit, a two-run double RBI in the left corner of the field to score Petrutz and Mark Black.

“Two-two counts, I was just looking for something to hit,” Giamarusti said. “One to nine, we hit. We had to craft a little tonight.

Griffin was happy his team didn’t view Saugerties – who beat Amsterdam in last year’s final – any differently because of 2021.

“That’s what makes this team so special. Each game is its own entity,” Griffin said.