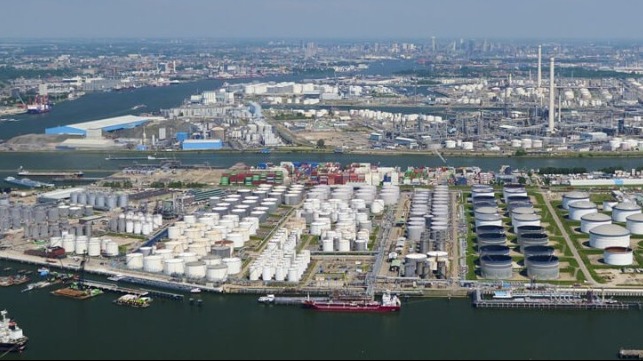 Efforts continue to build the necessary infrastructure to support the emergence of ammonia as an alternative energy source for marine and other industries. The final step in building the supply chain, Horisont Energi, which plans to produce blue ammonia in northern Norway, will work with liquid bulk storage company Koole Terminals on the development of a terminal and ‘a storage facility in the port of Rotterdam.

The companies will explore establishing a strategic and collaborative relationship for the storage of ammonia produced and shipped from Norway to Rotterdam. The agreement will also cover technical and business conceptual models for the storage of ammonia products, service solutions and technologies for further distribution, to meet expected demand in North West Europe.

â€œAs Horisont Energi and our partners work to develop the first European clean ammonia project on a global scale, it is essential to establish relationships with key storage, handling and transport partners in the region, in order to to ensure that our clean ammonia can reach all potential customers, â€said BjÃ¸rgulf HaukelidsÃ¦ter Eidesen, CEO of Horisont Energi.

Horisont Energi recently announced a cooperation agreement with Equinor and VÃ¥r Energi, the two largest offshore oil and gas producers in the Barents Sea region, on the joint development of the Barents Blue project, the first production facility at large scale of blue ammonia in Europe. The Barents Blue project is based on the use of natural gas, clean water and renewable energy to produce clean ammonia, which is a key industrial gas used globally in the fertilizer and chemical industry. and is a very efficient hydrogen carrier, which makes it one of the most promising fuels for the decarbonisation of certain parts of the maritime sector. During the production process at the Barents Blue ammonia plant, over 99% of the CO2 will be captured and permanently stored in the Polaris offshore reservoir below the seabed off Finnmark.

â€œWe look forward to working with Horisont Energi to materialize their European blue ammonia distribution center. We see ammonia as one of the important future liquid energy carriers, and as such this project fits perfectly into Koole’s sustainable energy strategy, â€said John Kraakman, CEO of Koole Terminals.

Koole Terminals will play an important role in facilitating and supporting the distribution of ammonia from Barents Blue’s production plant in Hammerfest, northern Norway. The company currently has 11 terminals in Europe with a total storage capacity of over 4.1 million cubic meters. Koole has a distribution network including ships, trucks, railways and pipelines.