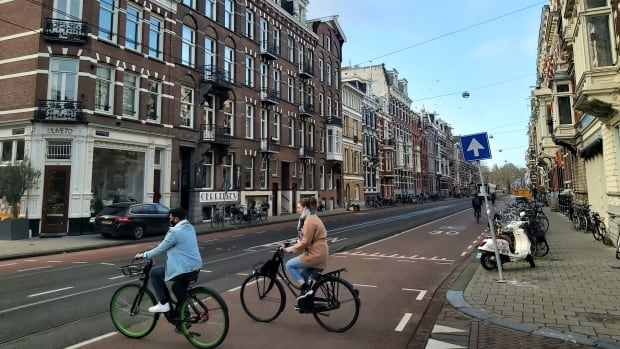 This column is an opinion of Tyler Stapleton, an avid cyclist who lives in St. John’s. For more information on CBC Opinion Sectionplease consult the FAQs.

I live in downtown St. John’s. But it hasn’t always been that way. I spent my childhood between Kelligrews and Paradise – the suburbs, the dormitory communities, the places that seem to exist for the sole reason of housing people and sending them to Sin Jawn. A city trip was something special for us. It was only done once a week and even then it was scheduled so that we quickly got everything we needed and then left Dodge.

A bike for me, growing up was a play thing. Riding back and forth on the track with its trestles covered in railroad ties with huge gaps through which you could see the water below, or the ” rock strewn beach trail that was a mess of loose ballast and deeply rutted ATV trails.

Paradise Road was also not a paradise for cyclists. To me, it was a superhighway full of narrow shoulders, whizzing cars and dump trucks. Bike paths were not part of my vocabulary. Bike paths did not exist. The sidewalks didn’t really exist either, let alone plowed sidewalks.

A few years ago I moved to downtown St. John’s. I wanted to be close to town because a 25 minute ride from the shore in traffic and back was not on my wish list. I absolutely did not want a postage stamp in a housing estate. I thought big lots near town didn’t exist, so might as well bite the bullet and go all out city-dwelling.

My desire to go without traveling outweighed my desire to be able to walk all four sides of my house, so I headed for the port. I managed to find a place where I could walk, had a driveway and a view of the harbor, and was close to everything. She had been with Lazy Bank for over 130 years and I was her new guardian. Now, there’s a long story for another time.

With everything I need close at hand, I park my vehicle in the driveway and there it is. And sits down. And sits down. High gas prices don’t affect me much because I hardly drive — less than 5,000 kilometers a year. When I want to move, I walk. And what I wish I could do more of is cycling.

I have a few friends who are avid cyclists. With my new life downtown, I find myself constantly engrossed in conversations about mobility, walking, connected and complete communities, convenience stores, bike paths, transit, urban planning and more.

Everyone in the city should have a vision of what they would like St. John’s of the future to become. I believe in a world where we can all move easily and safely around the city to work, live and play using alternative means of transport. This vision can sometimes be described as utopian which will never be possible in our small town clinging to the cliffs on the edge of the North Atlantic.

At the end of December, I had the chance to travel with my work on a boat across the Atlantic to Amsterdam. Now there is a city famous for its bicycles. Sure, I had traveled before, but this was my first chance to experience a city through the eyes of a downtown resident.

On my first day ashore, I strolled through the narrow, winding, cobbled lanes of the historic center of town – where a house built in the 1700s is fairly new, and it’s not strange to see “Anno 1613” stencil on the narrow and winding facades, brick houses. There are shops on every corner, cafes with tables and chairs outside, large squares full of trees and statues, tram tracks winding through the city and barely a car to have.

It would be a nightmare to drive a car there. Even a tiny one. With so many one-way streets, bollards blocking cars from pedestrian zones, and people and bikes everywhere, a car would be my last choice. It was clear that four wheels were not the way to get around Amsterdam.

Yes, there were bicycles. Lots and lots of bikes. The first sight that greets you as you exit Amsterdam Central Station is a multi-storey bicycle parking lot. All these people cycling through the city center casually and quietly seemed quite natural. People dressed in their best Sunday bikes. Nans and Pops, Omas and Opas, all on bikes.

Bikes with cargo compartments full of groceries, or kids, or both. Bicycles with large closed compartments marked with Fed-Ex or DHL logos. Bikes with flat beds in the front to transport a comfortably lying dog. Most people used a bicycle not for sport or play, but for transportation and as a tool for living.

Over the next few days, I ventured on foot beyond the medieval lanes and into the wider, straighter, organized and planned streets and canals of the Georgian and Victorian parts of the city. Here, the narrow streets have given way to wide boulevards lined with street trees, wide sidewalks, tram stops and, above all, dedicated, separate and protected cycle paths.

Here the city had gone from being a car-unfriendly and people-unfriendly city, simply because of its historic design, to a city that was still car-unfriendly but now people-friendly due to planning and policy choices at the time. within the city. There is room for four or five lanes of traffic, but there are only two.

It has not always been so. The Amsterdam of the 1970s and earlier was one where almost every inch was dedicated to the car. Old photos show cars stuck together. You’d be forgiven for thinking it was Kenmount Road at 5pm during construction season. But thanks to a series of active choices by the city’s leaders, Amsterdam grew into the beautiful city it is today.

As all of this sank, I found myself with a strange feeling: I went from admiring bikes and the bike network to becoming annoyed by it, a feeling that haunted me for a moment. I could hear myself saying, “Look how easy and safe it is for people to get around. There’s plenty of public transport. There are bike paths I could ride across the country, not to mention the city. Why don’t I live in a place where it is possible to travel so easily?”

I can already hear you shouting the familiar lines from here. But St. John’s weather is a poor excuse not to invest in and embrace active transportation. All you have to do is look to European cities further north in Scandinavia, where cycle paths are cleared of snow in winter and cycling is a 365-day-a-year event despite cold, wet and harsh conditions. To create this utopia in St. John’s, we must foster a culture of active transportation. Such a culture has been chosen and nurtured in Amsterdam for over 40 years. It’s not too late to start in St. John’s.

I will never forget having a conversation with Mats, a 26 year old Dutchman who worked on my boat while we were moored at the shipyard. I asked him if he lived in Amsterdam.

“Haarlem. It’s only 20 minutes by train,” he said. I told him that I live in a city in Canada where there are no trains. There are no trams. There aren’t even bike lanes. From the reaction on his face, you’d think I told him I lived on Mars. Living in such a place was completely mind-boggling and weird for him. He had grown up not knowing anything different. Millions of young Dutch citizens are immersed in the cycling culture. Will St. John’s children of the future be as mystified as Mats at the idea of ​​a town without bike lanes?

Three centuries from now, I hope the old houses of Lazy Bank are still thriving, just like the crooked old houses of Amsterdam are today. It would be nice if there were also bike paths to ride on. Hopefully it won’t take that long.