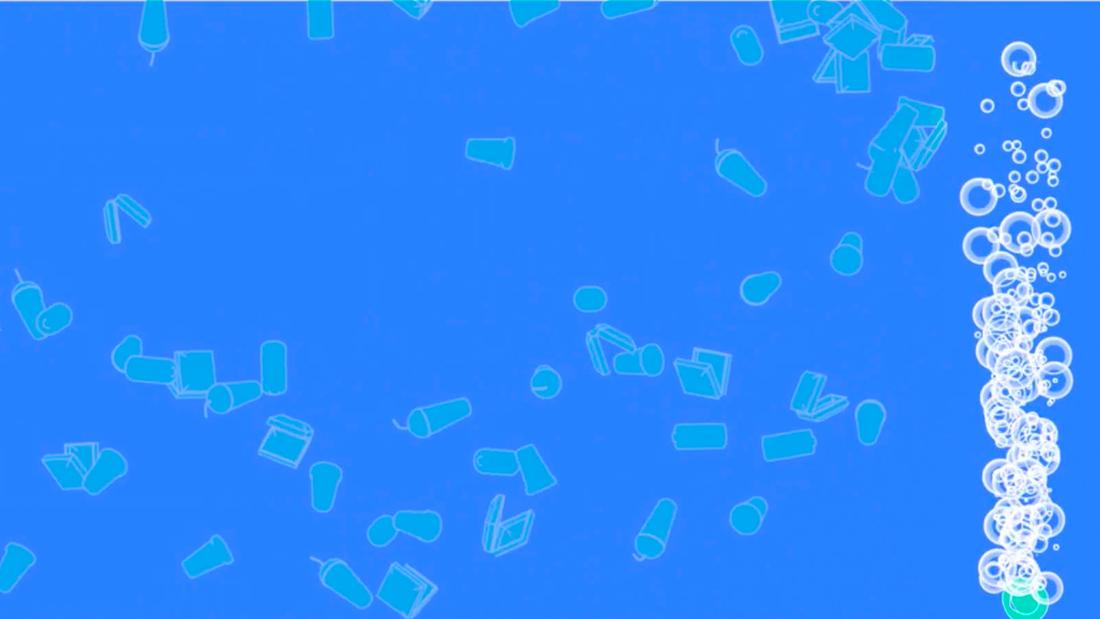 A “bubble barrier” traps plastic waste before it enters the sea

“The Bubble Barrier” was developed as a simple way to stop plastic pollution flowing from streams into the ocean. An air compressor sends air through a perforated tube that runs diagonally across the bottom of the channel, creating a flow of bubbles that trap waste and guide it to a collection system.

According to Philip Ehrhorn, co-founder and chief technology officer of The Great Bubble Barrier, the Dutch social enterprise behind the system, it traps 86% of the waste that would otherwise flow into the IJssel River and further into the the North Sea.

Commissioned by the municipality of Amsterdam and the regional water authority, the Bubble Barrier was installed in October 2019 in less than five hours.

Ehrhorn says the idea is to catch plastic without having a physical barrier like a net or dam blocking the river, which could disrupt aquatic life or interfere with navigation.

Waste is lifted to the surface and guided to a collection system.

To minimize noise, the compressor is located 50 meters from the barrier, in a reused shipping container, and is powered by renewable energy from Amsterdam.

Ehrhorn says that while the bubble curtain can trap plastics up to 1 millimeter in size, the capture system only retains objects 10 millimeters and larger. According to Ehrhorn, a small drifting aquatic life can be caught in the current of the bubble curtain, but over time it is able to pass through the catchment system. He adds that an independent third party is currently assessing the movement of fish around the bubble barrier.

With a background in naval architecture and ocean engineering, Ehrhorn, originally from Germany, first designed the bubble barrier when he spent a semester abroad in Australia studying environmental engineering. In a wastewater treatment plant, he saw how oxygen bubbles were used to break down organic matter.

â€œIt was like a jacuzzi,â€ says Ehrhorn. “And what I noticed was that some of the plastic that people had thrown down the toilet was collecting in one corner.” This observation sparked his thesis and later the technology behind the bubble barrier.

Unbeknownst to Ehrhorn, three Dutch women were working on the exact same idea in Amsterdam. Anne Marieke Eveleens, Saskia Studer and Francis Zoet were at a bar one evening discussing plastic pollution when they looked at the bubbles in their beer glasses and the inspiration hit.

Luckily, a friend of Ehrhorn saw their video presentation for a competition inviting solutions to remove plastic from the environment.

â€œWe connected and found we had the same vision and the same mission,â€ recalls Ehrhorn. “So I handed in my thesis and moved to the Netherlands the next day.” Together, the four turned a simple idea into a full-fledged bubble barrier pilot project on Amsterdam’s IJssel river.

It is believed that up to 80% of ocean plastic comes from rivers and coastlines. Ehrhorn says much of the plastic in Amsterdam’s Westerdok Canal comes from garbage bags that local residents leave in front of their homes. If the bags tear, wind and rain can carry trash into the canal.
Read: Could mealworms help solve our plastic crisis?
Globally, 11 million tonnes of plastic waste is dumped into the oceans each year, where it can suffocate and entangle certain aquatic species. Plastic debris less than five millimeters in length, called microplastics, can also affect marine life. Often mistaken for food, microplastics are ingested and have been found in zooplankton, fish, invertebrates, and mammalian digestive systems.
StÃ©phanie B. Borrelle, Seabird Conservation Ecologist, is the Regional Marine and Pacific Coordinator for BirdLife International. His research on plastic pollution found that even with “ambitious commitments currently set by governments”, we could release 53 million metric tonnes of plastic waste into the world’s freshwater and marine ecosystems by 2030.

As a member of the Plastic Pollution Emissions Working Group, a team of self-proclaimed â€œscientists, policy specialists and conservation practitionersâ€, Borrelle also carried out research on the bubble barrier.

“It was really interesting for us to examine, mainly because other types of barriers placed in aquatic environments can be a bit problematic in how they interact with ecological functioning and animals moving through this system.” , she says.

Borrelle has some reservations about the technology; She wonders how well the system would suit large rivers and developing economies, with a pump that requires continuous electricity and occasional maintenance, and she notes that large pieces of plastic may not be lifted by them. bubbles.

Read: How NASA technology can help save whale sharks, the world’s biggest fish

â€œAlso, if you have a large amount of traffic, it’s going to disrupt the buildup of plastic,â€ Borrelle said, adding that boats passing through the barrier could potentially lead to plastic.

â€œThere are some limitations, but in my opinion, it’s an important part of the toolbox we have to tackle the plastic already in the environment,â€ she says. â€œThe problem with plastic pollution is that there is no one-size-fits-all solution to fix it. Once it’s in the environment, it’s about trying to get it under everyone. possible angles. “

For now, the Great Bubble Barrier team is working with the Amsterdam Water Authority and the NGO Plastic Soup Foundation to analyze what type of plastic has been captured and identify its sources, in order to help develop new ones. plastic waste policies.

The Amsterdam water authority empties the 1.8 meter by 2 meter basket from the catchment system three times a week. The contents are sent to a waste handling company for sorting and the appropriate materials are recycled. Ehrhorn says the pandemic means they haven’t been able to quantify how much plastic the bubble barrier has caught to date.

The for-profit startup plans to install more bubble barriers in the Netherlands, Portugal and Indonesia. It indicates that the installation cost and energy consumption depend on the location and the flow of the river.

Beyond protecting the plastic in our oceans, the system could help change mentalities. Because the waste inside the catchment system is easily visible to passers-by, Ehrhorn believes it helps people realize how much waste ends up in our waterways; in this way, the barrier also acts as an educational tool to discourage litter and litter.

â€œIt focuses on waste that would otherwise flow unnoticed and even underwater,â€ he says. “It literally brings up to the surface, [that] which has never been seen otherwise. ”