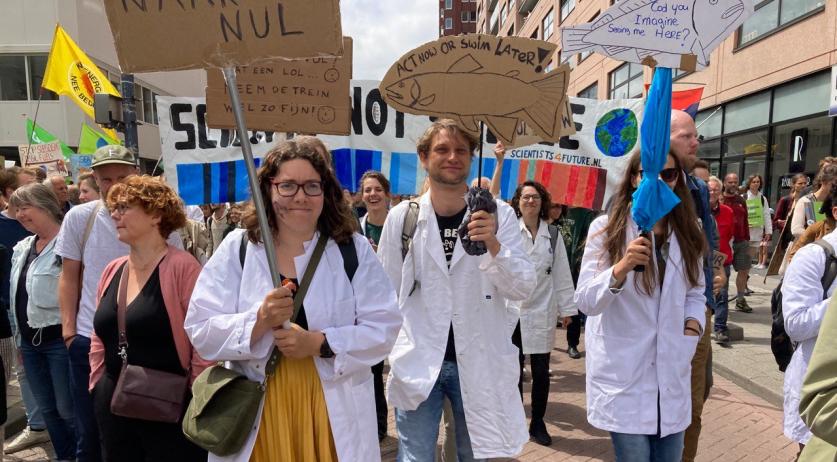 Ten thousand climate demonstrators started a climate march through Rotterdam from the Binnenrotte on Sunday afternoon. After a short program on the podium in the square in front of the Markthal, the demonstrators left around 1.45 p.m. for a tour through the center of the Maasstad.

The route will pass through the Blaak, the Coolsingel and the Hofplein, ending at the starting point. There, the day will end with a number of speakers and music.

During the climate march in Rotterdam, several demonstrators criticized the farmers with their banners and placards. With phrases like “Farmers, there’s nothing cool about nitrogen,” “Climate Defense Force,” and “Less mega stables, more biodiversity,” climate protesters have made it clear they are against recent protests by farmers.

“If I had left with the tractor I would have been spoken to by now,” read a large banner from an activist, referring to farmers’ protests against the Cabinet’s nitrogen plan. Farmers’ Action Clubs are holding a national day of protest next week.

Farmers are unhappy with the nitrogen plan recently announced by Minister Christianne van der Wal (Nature and Nitrogen). Emissions must be drastically reduced for nature to recover, with major consequences for farmers. According to government targets, nitrogen emissions in the Gelderse Vallei, Noord-Brabant and Limburg are to be reduced by more than half.

It is a coincidence that the climate march is held a few days before the farmers’ demonstration. In a sense, the actions are the opposite of each other: while farmers say the government is going too far with “unrealistic” plans to protect nature, environmentalists say the government lacks urgency to fight climate change. For example, they denounced the fact that coal-fired power plants are still open in the Netherlands.

Protesters also opposed aviation. Slogans such as “Boycott Schiphol” and “Less flights, more trains” can often be seen on cardboard signs. “Plane = 30 euros. Train = 300 euros. How?!” is on the plate of Fenna, 21, from Rotterdam. “Going on holiday by train has become unaffordable for students like me. This really needs to change.”

The organizations behind the protest want “deeds not words” to limit global warming. The Netherlands is at a standstill in the face of the climate crisis, they believe. “Coal-fired power plants remain open and Urgenda climate dossier deadlines are missed, as the climate crisis looms large with floods, wildfires and famines across the globe.”

They also establish a link between global warming and the war in Ukraine. “Fossil fuels are driving the climate crisis, but also war, conflict and pollution. Due to a broken system, we seem to be stuck with fossil fuels as a society. , we contribute to horrible wars, such as the one in Ukraine,” said Faiza Oulahsen of Greenpeace.

According to the organizers, there is still a lot to do in Rotterdam in the area of ​​sustainability, especially in the port, where, for example, the import and refining of fossil fuels is a major industry.